Sandhill Cranes Put On A Show On Upgraded Camera 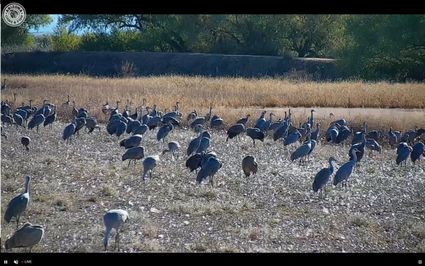 Sandhill cranes have returned to southeastern Arizona and the Arizona Game and Fish Department's live-streaming camera is again trained on their wintering grounds at Whitewater Draw Wildlife Area.

Viewers this year can now watch thousands of the large migrating birds in high-definition after the department recently upgraded its live-streaming camera.

"This is truly an exciting time of year at Whitewater Draw," AZGFD Watchable Wildlife Program Manager Randy Babb said, noting that each year sandhill cranes come as far away as Siberia to winter in southern Arizona. "Not only are the birds putting on a wonderful show, we are pleased to offer this feed in HD in an attempt to bring the public a truly unfiltered, crisp view of our state's wildlife."

The live stream, which can be viewed at http://www.azgfd.gov/sandhillcranes, is one of two in the country that offers viewers a glimpse into crane wintering habits. The live stream is offered in late October, when cranes first start to arrive at Whitewater Draw, through March or early April when the birds leave to migrate to northern nesting grounds.

At last count there were over 14,000 cranes roosting on Whitewater Draw Wildlife Area. The number of wintering cranes will continue to increase throughout the next month of so.

The Best Time To View

The best time to view the birds is a half-hour before and up to a half-hour after sunrise, just before they leave the roost to feed for the morning. Cranes also return to Whitewater Draw sometime before noon and typically remain at the wildlife area for the remainder of the day.

While the department will do its best to keep the camera focused on the cranes and other interesting wildlife subjects, there will be times it isn't possible due to the unpredictability of wildlife. Viewers that don't see activity when they try the camera are encouraged to routinely check back.

The department also encourages the public to plan a visit to Whitewater Draw Wildlife Area for a full sensory viewing experience.

Worldwide there are 15 species of cranes scattered across the globe. Two species of cranes are found in North America: the endangered whooping crane and sandhill cranes, which are the most abundant crane species on the planet.

Cranes sport long necks, beaks and legs, and have short tails that are not visible when the wings are closed. Sandhill cranes are predominantly grey with fleshy red caps on their heads. The largest subspecies can stand nearly 4-feet tall and sandhill cranes are long-lived and mate for life.

They are wary birds that shy away from areas of dense vegetation that may conceal predators. Cranes prefer to feed and roost in open areas where potential danger can be seen from a distance. Wintering sandhill cranes often feed on agricultural grain crops but may also frequent open desert and fallow fields.

The sandhill crane live-stream is supported by the Wildlife Conservation Fund, which comes from tribal gaming and the Wildlife Viewing Program. The cameras are supported in part by public donations.

The camera is one of three live-streaming feeds offered by AZGFD. The department also offers viewers a glimpse into the lives of desert pupfish, which is one of 34 species of native fish. The other camera is set inside a seasonal bat roost at Cluff Wildlife Area near Safford.

To view the live-streaming cameras or to find information on wildlife viewing and upcoming events visit http://www.azgfd.gov/wildlife and click on "Wildlife Viewing."