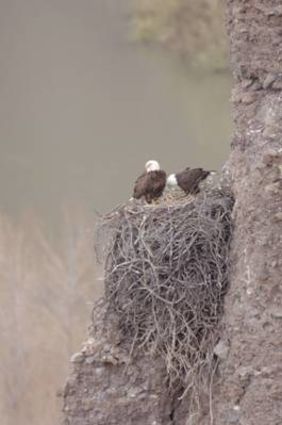 Arizona's bald eagle breeding season is on the horizon and multiple public land and water areas will be closed to protect the majestic animals and ensure even more young eagles take to the skies this spring.

Each year as part of its highly successful program to conserve and protect bald eagles in the state, the Arizona Game and Fish Department (AZGFD) asks outdoor recreationists, aircraft pilots, drone operators and motorized paragliders to do their part not to disturb the state's 87 eagle breeding areas.

"December is a sensitive time for bald eagles because they're often busy preparing their nests for eggs," said Kenneth "Tuk" Jacobson, AZGFD bald eagle management coordinator. "The birds often nest, forage and roost at rivers and lakes that are also popular recreation spots. Because of that, it's important for us all to do what we can to protect the birds to ensure their populations statewide continue to flourish. That success wouldn't be possible without the cooperation of outdoor recreationists who respect the closures during breeding season."

During the 2018 breeding season, a record 87 young hatched and 70 reached the important milestone of their first flight, known as fledging.

To Further Protect The Eagles

To further protect the eagles, various land and Wildlife management agencies will also close areas around breeding locations, including near popular recreation sites.

Pilots are reminded to maintain the FAA-recommended 2,000-foot above ground level advisory when flying over bald eagle habitat, while drones and paragliders are asked to avoid the areas completely. Bald eagles are sensitive to even short durations of low-flying aircraft activity near their nests and just a few minutes of disturbance can lead to a nesting failure.

AZGFD's bald eagle management efforts are supported by the Heritage Fund, an initiative passed more than 20 years ago to provide for Wildlife education and conservation through Arizona lottery ticket sales.

Special brochures for pilots regarding this advisory can be obtained by calling the Arizona Department of Transportation or the Arizona Game and Fish Department's Terrestrial Wildlife branch at (623) 236-7506.

Information concerning seasonal closures can be found at https://www.azgfd.com/bald-eagle-breeding-season-kicks-off-leads-to-restrictions/. 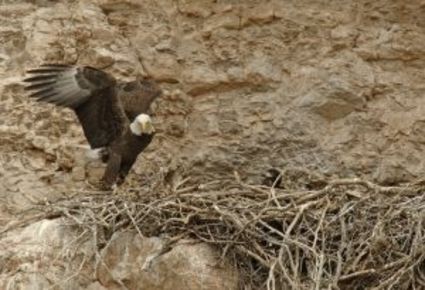 The seasonal bald eagle closure on the Tonto National Forest is in effect through June 30, 2019. The seasonal closure provides protection from human disturbance for bald eagle nesting, incubation, nestlings and fledglings during the critical reproductive period.

Forest officials remind visitors that active seasonal breeding area closures include the following: (1) Goldfield on the Mesa Ranger District, (2) Lower Verde and Cliff on Cave Creek Ranger District, and (3) Seventy-Six, Armer, Bachelor, Pinto, and Tonto on the Tonto Basin Ranger District. River rafters may pass on the Lower Verde River in the closure area but may not stop or exit the river.

The forest orders and maps of the closed areas are posted on the forest website: https://www.fs.usda.gov/detail/tonto/home/?cid=STELPRD3825951

Thank you for helping to protect the bald eagles during the short-term seasonal closure.