At the beginning of June, officials at the Arizona Game and Fish Department (AZGFD) predicted the state would see a lot of nuisance bears entering populated areas in search of easy food. That forecast proved accurate, as the state wildlife agency dealt with more than 200 reports of bear activity from more than 50 Arizona communities between June 1-30.

While bear calls also were received by County Sheriff's offices, state and local police, and Tribal law enforcement and wildlife agencies, Game and Fish received 206 calls about nuisance bears in June. According to AZGFD Flagstaff Regional Supervisor Scott Poppenberger, the majority of these calls are resolved when homeowners remove things that attract bears or they scare the problem bear away.

"On most bear calls, we counsel the person who reported the incident to make their property less attractive to bears by taking the pet food indoors, removing bird feeders, hazing bears to scare them off and securing trash until pick-up day," said Poppenberger. "As with most wildlife interactions, there's always something we humans can do to make bears stay away."

In June, AZGFD captured a total of 20 bears that were causing damage in populated areas. Seven of those bears were repeat offenders or so aggressive they had to be euthanized. The euthanized bears raided campsites, emptied freezers, knocked over garbage cans, broke into structures, killed chickens, camped out in dumpsters or tried to enter homes and other buildings. Wildlife managers assessed each bear's aggressiveness and behavior and determined each bear was a threat to public safety.

Fourteen bears were relocated to specially selected bear release sites well away from human development, but relocating a bear doesn't always deter it. Two bears were recaptured when they returned to populated areas. A nuisance bear captured in Vernon and released in the wild showed up in Forest Lakes two days later, a distance of about 60 miles. That seems amazing, but according to Poppenberger, a cub first captured in Flagstaff traveled even farther. 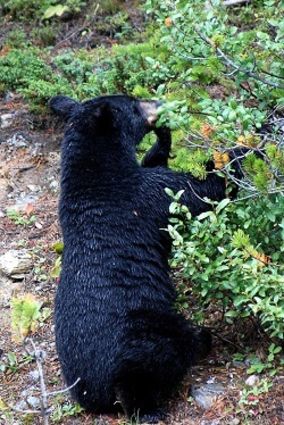 "A mother bear and two cubs were captured in Flagstaff and relocated east of town on a Sunday," said Poppenberger. "Four days later, one of the cubs was found in Kingman, a distance of at least 90 miles. If a 15-pound bear cub can walk 90 miles in four days, imagine how difficult it is to keep an adult bear in the woods once it has become accustomed to human food."

Keepers Of The Wild Nature Park

The cub picked up in Kingman was placed with Keepers of the Wild Nature Park, an Arizona exotic animal rescue facility located near Valentine. The mother bear and the other cub haven't turned up. For the month, AZGFD answered 206 bear calls and euthanized seven bears, or fewer than 3.4 percent of nuisance bears reported.