Doing So Can Create A Threat To People, Pets 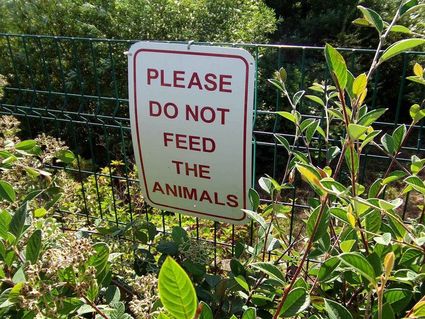 People who feed wild animals are creating a public safety problem in Arizona's Rim Country. Incidents of wildlife endangering people and their pets in this region have increased over the past few months, including the following:

• An elk regularly fed by Pine residents reportedly charged several individuals in separate instances. One woman was forced to take refuge in a greenhouse on her property to escape.

• Also in Pine, a young male elk entered a resident's yard through an open gate and began stomping on her dog. The dog later died from its injuries.

• A Pine resident freed an elk that had its antlers entangled in a tire swing (pictured). But the elk returned the next day because residents continued to set out food.

• In Strawberry, herds of increasingly aggressive javelina have rushed local residents. One man who was charged by a javelina killed it in self-defense.

More than a dozen elk and deer deaths have been reported to AZGFD in this region. In each case, residents were intentionally or inadvertently feeding the animals.

Aggressive behavior toward people by elk and javelina is unusual, but feeding increases the frequency of these conflicts. Wildlife that become comfortable around humans lose their natural fear and can become bold and aggressive.

In these recent reports to AZGFD, the aggressive behavior by wildlife appears unprovoked. Habituated animals often must be euthanized when they become a threat to human safety.

"The feeding and resulting habituation often causes these bold and increasingly aggressive behaviors, and can lead to animal deaths," said Arizona Game and Fish Department Wildlife Manager Joseph Sayer. "When you feed wildlife, you're not doing animals any favors. In fact, you may attracting them to their deaths."

According to AZGFD Veterinarian and Wildlife Health Program Supervisor Anne Justice-Allen, the inappropriate foods people give to wildlife also can kill them.

"Wildlife are adapted to survive on native vegetation," said Justice-Allen. "When deer, elk, and javelina eat grain or snack foods such as potato chips or kitchen scraps, they can develop conditions such as bloat, diarrhea, and bacterial infections, all of which can lead to death."

"Habituated wildlife also attract unwanted attention from both predators and people. When you attract prey animals, you'll also attract their natural predators and human hunters. We've seen an increase in disputes among neighbors when one wants to feed the wildlife, another considers it a nuisance, and still another wants to hunt it," added Officer Sayer. "When you feed wildlife you change its behavior, putting it, your neighbors and yourself at risk. Please help us keep wildlife wild."

When encountering wildlife, keep a safe distance and discourage interaction with them. AZGFD urges Rim Country residents to refrain from feeding wild animals to keep wildlife wild. Report aggressive or unusual animal behavior to the Arizona Game and Fish Department at (623) 236-7201 at any time, day or night.