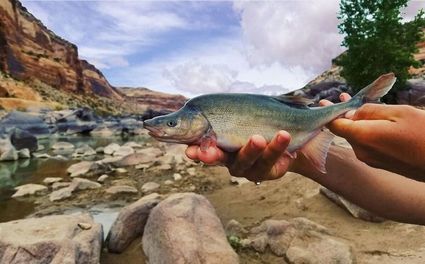 Through collaborative conservation efforts, the once-dwindling endangered humpback chub has been given a fighting chance against the currents of extinction, building a wild population large enough to soon be reclassified as a threatened species by the U.S. Fish and Wildlife Service.

The success was due to the efforts and commitment of multiple agencies, including the Arizona Game and Fish Department (AZGFD); Colorado Fish, Wildlife and Parks; Utah Division of Wildlife Resources; U.S. Fish and Wildlife Service (FWS); National Park Service; U.S. Bureau of Reclamation; U.S. Geological Service and others.

As a result, the FWS recently conducted a species-status assessment with assistance of AZGFD staff and determined the fish is no longer in danger of becoming extinct.

Within the next year, the FWS will propose the chub, which is found in the Colorado River below the Glen Canyon Dam in Page, be reclassified from endangered to threatened.

"The recommendation is based on sound science and data, and is the result of great conservation efforts implemented throughout the Colorado River," said Chris Cantrell, AZGFD Aquatic Wildlife Branch Chief, who in 2009 led the first translocation of humpback chub into Shinumo Creek, a tributary of the Colorado River.

"This is a special time for the Arizona Game and Fish Department and partner agencies whose hard work has brought a species back from the brink. While it's great to have seen significant progress, we realize the chub will continue to need the commitment and expertise of the Department and its partner agencies to conserve and protect this species for generations to come," Cantrell added.

The humpback chub, which was first described as a unique species from collections in the Grand Canyon in the 1940s, was not discovered in the upper Colorado River basin until the 1970s. It was placed on the original list of endangered species in 1967.

The chub prefer canyon-bound reaches of river where they complete their life cycle in swift, turbulent currents. The species gets its name from the fleshy hump behind its head. That adaptation coupled with large, curved fins allows the species to maintain position in the turbulent flows.

Habitat alterations are the greatest threats to the humpback chub.