"Poachers are criminals." If you talk to any of the Arizona Game and Fish Department's Wildlife managers, you're likely to hear that phrase repeated as they go about their work as part biologist, part law enforcement officer.

At the heart of the effort to eliminate and investigate poaching is the Arizona Game and Fish Department's operation game thief program, a silent witness initiative that encourages the public to report information or suspicious activity. Last year, more than 1,000 calls came into the operation game thief hotline (1-800-352-0700) as well as 75 submissions via the online form.

Those reports contributed to 76 citations being issued statewide for Wildlife issues including the illegal take of big game, fishing violations and the unlawful killing of raptors.

"Poachers are thieves. They do not represent the hunting community, and the majority of the reports come from hunters and anglers who are out in the field and witness suspicious activity," said Scott Fischer, program manager for operation game thief. "The hunting community does a great job of policing itself. If you see something, say something. Together we can make a difference for Arizona's wildlife."

Individuals who make a report to operation game thief will remain confidential and can report anonymously if needed. The program pays rewards for information that leads to an arrest.

In 2017, Wildlife violators were assessed $74,500 in civil fines, and that money goes directly into the department's Wildlife Theft Prevention Fund, which pays for the rewards as well as promotion of operation game thief. In addition, 51 individuals had their hunting and/or Fishing License revoked by the Arizona Game and Fish Commission as part of their penalty, one of which was a lifetime revocation. The department receives no general fund money from the state of Arizona.

It's also important to note that mistakes and accidents happen, and the department will work with hunters and anglers who immediately self-report their actions to the operation game thief hotline.

"Mistakes happen in any endeavor, and the amazing thing about hunters is they frequently report themselves," Fischer said. "Hunters respect Wildlife and because of that respect they're willing to risk penalties in order to ensure meat from the Wildlife they take is not wasted."

Meat from seized Wildlife is inspected by department Wildlife managers and typically donated to charities for human consumption.

Arizona's operation game thief program began in 1979, making it the second oldest initiative of its type in the U.S. The hotline (1-800-352-0700) was implemented at the time and takes reports of Wildlife violations 24×7. Wildlife is the property of the state, meaning that every Arizonan has a vested interest in protecting it. 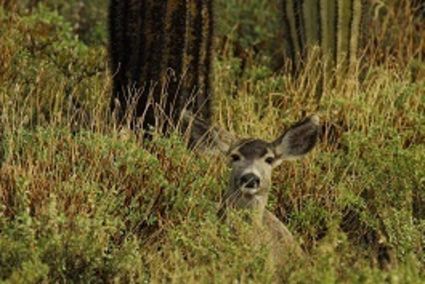 Anyone who witnesses a violation - whether it's related to hunting, fishing, feeding Wildlife or illegally possessing Wildlife - is encouraged to report that information to operation game thief and act on behalf of those who cannot speak for themselves, the Wildlife.