The Arizona Game and Fish Department (AZGFD) prides itself on providing ample fishing opportunities for its legions of anglers and the state's growing populations of cormorants have taken notice.

In early 2017, AZGFD began a study of the state's two species of the bird - neotropic and double-crested cormorants - both of which are federally protected under the Migratory Bird Treaty Act. Under those protections, Cormorant populations have flourished nationwide, competing with other Wildlife for a bounty of local fish at AZGFD's community fishing waters and privately stocked residential lakes.

"Cormorants are highly adaptable birds and we wish to learn more about them," said Larisa Harding, AZGFD Terrestrial Research program manager. "They are part of Arizona's Wildlife tapestry and we need to learn how these growing populations are connected to the landscape, their migration patterns and what impact - if any - their increasing numbers are having on other Wildlife, including area fish."

As part of that research, in late summer, AZGFD placed numbered, colored tags on the wings of birds near the Ocotillo and Sun Lakes communities in south Phoenix. More birds will be safely trapped, tagged and released across the metro area and in other areas of the state in the future. The public can help with the data collection by noting and reporting as much of the following:

• Location of any tagged birds (GPS locations are best but pond/water location or major cross streets is acceptable).

• Date and time of the observation.

Once collected, information can be entered at http://www.azgfd.gov/cormorantsurvey on any computer or mobile device or by leaving a message with details at 623-236-7301.

The department will use the data to improve aquatic habitats and to assist in developing management practices that will benefit all Wildlife and address potential impacts to local fishing resources. 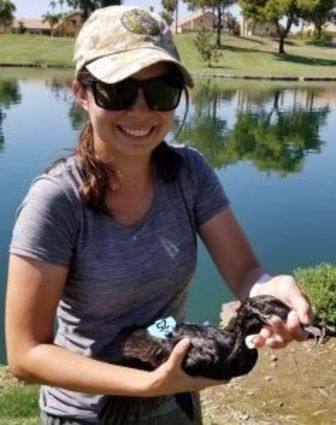 FOR THE RECORD -- An Arizona Game and Fish Department biologist holds a newly tagged cormorant as part of a research project on the birds. Those spotting the birds are asked to record their observations at www.azgfd.gov/cormorantsurvey.

"Data [show] that fisheries around the country have been greatly impacted as Cormorant populations continue to grow," said chris cantrell, AZGFD Fisheries Branch chief. "As Cormorant numbers increase throughout Arizona, we must study to see what impact this will have on Wildlife and our fish populations. This research will better position us to learn what we can about these birds to prepare for the future and to develop sound management techniques."

Additionally, cormorants are colonial birds, often feeding, roosting or nesting in high concentrations. As such, in large numbers they have been known to become a nuisance to residents and on park facilities.

The goal of the project is to develop a plan for Cormorant management in Arizona to maintain healthy populations of the birds with the U.S. Fish and Wildlife Service, while minimizing their impact to fishery resources, human property values and human safety.