Sandhill Cranes Wing Their Way Back To Arizona

It happens every year. As if on cue, they pick up and travel thousands of miles from places like Idaho, Wyoming and Montana, and some from as far away as Canada, Alaska and even Siberia.

They are Arizona's true "snowbirds," content to spend winter days basking under mild, sunny skies before getting the itch to turn around and head back north sometime in March or early April.

For the past few weeks, sandhill cranes by the thousands have been trumpeting their annual arrival in southeastern Arizona, primarily at the Whitewater Draw Wildlife Area in the Sulphur Springs Valley - and a lot more of them are on the way.

Their Numbers Will Grow

"We are excited to see the sandhill cranes return for the winter," said Randy Babb, watchable Wildlife program manager for the Arizona Game and Fish Department. "While there are only a few thousand in the area now, their numbers will grow to more than 30,000 before they migrate in the spring.

"The cranes afford Wildlife lovers one of Arizona's greatest Wildlife spectacles through visual and sound experiences that most of us will never forget."

The department's Whitewater Draw Wildlife Area serves as a roosting and loafing place for the cranes and offers viewing decks and trails from which other migratory birds, such as waterfowl, grassland sparrows and an assortment of raptors, often can be seen. The fields surrounding the Willcox Playa in the vicinity of Kansas Settlement, or farther south near Elfrida and McNeal, also are good places to see cranes. In western Arizona, along the Colorado River south of Ehrenberg, many cranes winter at the Cibola National Wildlife Refuge.

For those who can't make the trip to view the raucous birds with long necks, beaks and legs, the department has made it convenient for anyone with an Internet connection to enjoy this thrilling wildlife-watching experience. This marks the third year that a "crane cam" will live stream the wintering habits of the cranes at the Whitewater Draw Wildlife Area. 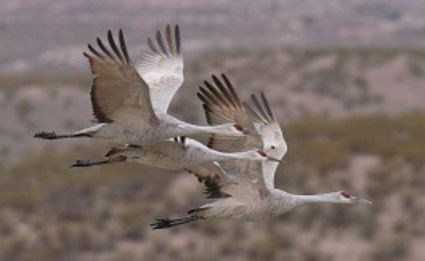 The live stream can be viewed at www.azgfd.gov/sandhillcranes. The best time to see the birds is about the first hour after sunrise, before they leave the roost to feed for the morning. The cranes usually return later in the morning (before noon) and remain at the Wildlife area for the rest of the day. On occasion, the birds will fly out to feed again in the afternoon and return at dusk.

The department will do its best to keep the camera focused on the cranes, but there might be times when that's not possible due to the unpredictability of Wildlife. Viewers who don't see activity are encouraged to check back on a routine basis.