An annual survey of the endangered Mount Graham Red Squirrel showed a significant decline due to the effects of the lightning-caused Frye Fire in the Pinaleño Mountains of southeastern Arizona.

The annual survey, conducted jointly by the Arizona Game and Fish Department (AZGFD), Coronado National Forest, U.S. Fish and Wildlife Service, Arizona Center for Nature Conservation-Phoenix Zoo, and the University of Arizona, resulted in an estimate of only 35 squirrels.

This is a significant decrease from the 252 squirrels estimated in 2016. Evidence of the Frye Fire was observed in 95 percent of the surveyed locations, 80 percent showed at least some habitat loss, and 44 percent were completely burned.

"Although the estimated numbers were significantly lower this year, we are uncertain if our standard survey method allows for an accurate estimate in severely burned areas," said Tim Snow, AZGFD terrestrial Wildlife specialist. "Our current survey methodology does not account for squirrels that dispersed from fire impacted areas. Surveyors observed some squirrels in previously unoccupied areas."

Annual Red Squirrel surveys consist of visiting all known middens, which are areas where red squirrels store or cache their cones. Activity at these middens is used to estimate the population size.

"This year the Forest has experienced a particularly challenging fire season, with 79 fires burning over 125,000 acres," said Coronado National Forest Supervisor Kerwin Dewberry. "Several fires covered large portions of the mountain ranges we manage, including the Frye Fire at over 48,000 acres in the Pinaleño Mountains.

"We appreciate the efforts of fire suppression personnel, and of the Burned Area Emergency Response Team. Their evaluation and recommendations will guide us as we work to stabilize and protect those areas on Mt. Graham that sustained damage from the fire, including Mt. Graham Red Squirrel habitat."

"This is a textbook example of how species with low population sizes, especially those confined to a small geographic area, are vulnerable to natural events such as fires, floods, and severe drought," said Steve Spangle, U.S. Fish and Wildlife Service Field Supervisor. "We're grateful to have a cadre of the best squirrel biologists and habitat specialists dedicated to this subspecies' survival.

"Survival through this winter may be the key to the persistence of this species given the fire effects on their habitat," said Snow. Immediate conservation measures under consideration due to the effects of the Frye Fire include assessment of the remaining habitat, reducing food and habitat competitors, supplemental feeding during this winter, as well as the enhancement of natural middens. These actions will be followed next spring by a complete census of the population in the Pinaleño Mountains.

The subspecies was listed as endangered in 1987. Mount Graham red squirrels live only in the upper elevation conifer forests of the Pinaleño Mountains and feed primarily on conifer seeds. This subspecies is highly territorial and has lower reproductive rates than red squirrels in other locations. 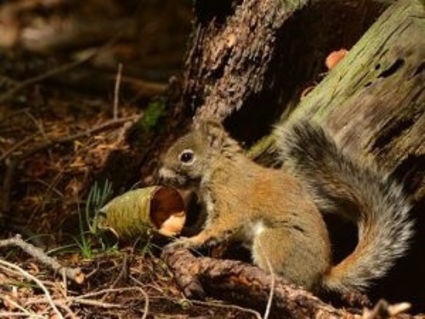 Other long-term impacts to Mount Graham red squirrels and their habitat include insect infestations, competition with non-native Abert's squirrels, and poor cone crops caused by drought, all of which influence population size; however, this year's fire had unprecedented impacts.

Biologists continue to explore new methods to conserve the species, including continued squirrel research, developing long-term forest management strategies across the fire-impacted landscape such as reseeding and planting coniferous trees, and a managed care breeding program. The Mount Graham Red Squirrel population peaked at about 550 animals in the late 1990s, but typically ranges between 200 and 300 individuals.