Zoos may be the last hope for the turtles of China. 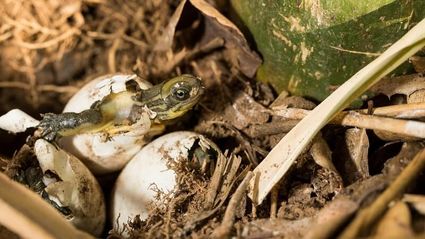 Staff at the Turtle Conservancy are celebrating the hatching of three Critically Endangered Pan's Box Turtles (Cuora pani) this week at their conservation center in California. It is the first time the Turtle Conservancy has hatched this species and the first second generation breeding of this species in the United States. Pan's Box Turtles are understood to be effectively extinct in its native China due to over-collection for the medicinal and pet trade.

"This is a critical step forward for Pan's Box Turtle, a unique and little-known species that really needs more attention," said Dr. Peter Paul van Dijk, Field Conservation Programs Director at the Turtle Conservancy. "Our efforts, along with those of our global partners, will contribute to ensuring their future on this planet."

This hatching success was years in the making. The parents hatched at the Fort Worth Zoo and Zoo Atlanta as part of the Association of Zoos and Aquariums (AZA) Species Survival Program (SSP). They came to the Turtle Conservancy in 2010 where they grew to adulthood and bred for the first time this spring.

The Turtle Conservancy is home to one male and four female adult Pan's Box Turtles, along with dozens of other species of threatened turtles and tortoises.

These animals represent a part of the North American "assurance colony" that is a last line of defense against extinction, with the ultimate goal of restoring wild populations. The Turtle Conservancy was the first organization in the world to return captive-born turtles to their native country for conservation when they sent young Golden Coin Turtles back to Hong Kong in 2012.

"We've been successful returning animals back to their native country in the past," said Turtle Conservancy co-founder and president Eric Goode. "With this species that will be a much more daunting task, but my dream is to let all wild animals be exactly that, wild."

The species is endemic to a small area of Central China, and may have been relatively common locally until the 1990s, when turtles increasingly became the focus of the traditional Chinese medicine markets. Now, China has grown into the largest market for turtles and tortoises in the world. Turtles and many other animals are collected and sold into the traditional medicine and food trade in massive quantities, while the exotic pet hobby is growing rapidly. The Pan's Box Turtle can fetch prices upwards of $10,000 in the animal trade.

The Conservancy protects more than 45,000 acres world-wide of wild land for endangered turtles and tortoises, along with other threatened species including jaguars, macaws and antelope, and native flora. It is their hope they can continue to protect viable habitat for other species, including the Pan's Box Turtle.

• The Turtle Conservancy works to alleviate threats to highly threatened turtles around the world by protecting land and captive breeding endangered species.

• Asia is the world's largest consumer of turtles - for the food, traditional medicine and pet trade.

• The Turtle Conservancy is the only AZA-certified facility dedicated solely to the conservation of turtles and tortoises.

Since 2005 the Conservancy has combined this highly successful breeding program with protecting land in Africa, Asia, and North America. For more information, visit www.turtleconservancy.org.