Chiricahua leopard frogs received extra help getting the hop on avoiding extinction after 454 of the threatened species were recently released into restored habitat on the Clifton Ranger District on the Apache-Sitgreaves National Forest.

"This project is a huge success toward safeguarding this species for future generations," said AGFD biologist Audrey Owens. "The Chiricahua leopard frog nearly vanished from eastern Arizona due to habitat degradation, but these dedicated agencies and local ranchers each worked collaboratively to help restore wetland habitats in 2016. This important work has given this animal a true fighting chance."

In May, AZGFD biologists, in coordination with the BLM, USFWS, USFS and NMGFD, transported leopard frog egg masses from one of Turner Enterprises' ranches in south central N.M. and the BLM rearing facility in Las Cruces, N.M. to the ACNC – Phoenix Zoo.

The zoo head-started the egg masses, which involves raising tadpoles from the collected egg masses in a predator-free environment, so that the juveniles can be released into the wild. The eggs produced tadpoles and ultimately hundreds of the small threatened frogs. 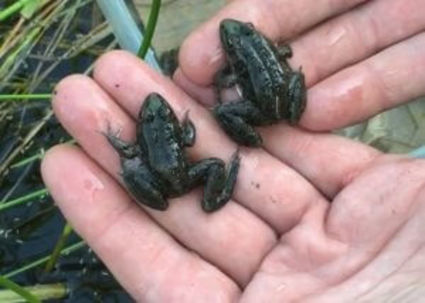 "In the wild, approximately five percent or less of the eggs in a mass survives to metamorphosis," said Stuart Wells, director of conservation and science with the ACNC -Phoenix Zoo. "With our head-starting program, as many as 90 percent of the hatched tadpoles survive to be released as juvenile frogs or late-stage tadpoles.

Releasing a large number of animals back into a site greatly increases chances that more will survive to adulthood and reproduce, preserving valuable genes."

During the fall release, AZGFD biologists placed juvenile the frogs into restored habitats on the Clifton Ranger District and more are expected to be released in spring to provide an additional boost to the wild populations.

Over the years ACNC-Phoenix Zoo has provided more than 24,000 juvenile frogs and late-stage tadpoles for release into the wild in Arizona.

This conservation story is a direct result of all of the partnerships involved over the years. The efforts are part of an established recovery plan for Chiricahua leopard frogs, which are native to Arizona, New Mexico and Mexico.