The Arizona Game and Fish Department (AZGFD) has submitted its official comments on the U.S. Fish and Wildlife Service's (FWS) draft Mexican wolf recovery plan which, when finalized, will outline a science-based strategy for continuing the successful reintroduction of Mexican wolves in its historic range.

The FWS developed the draft recovery plan to replace the outdated 1982 plan. The updated plan was done in collaboration with state wildlife agencies in Arizona, New Mexico, Utah and Colorado; independent scientists from universities in the U.S. and Mexico; nongovernmental organizations and members of the 2010-13 Science and Planning Team.

The updated draft plan released this summer continues to build upon the successful recovery program, which has seen the Mexican wolf population more than double since 2009 to at least 113 wolves in the wild.

"This draft Mexican wolf recovery plan is the product of years of collaboration and coordination with federal agencies in Mexico, independent and university wolf experts, as well as state, federal and tribal agencies in the U.S.," AZGFD Assistant Director Jim deVos wrote in a letter to the FWS.

"The Arizona Game and Fish Department is committed to continue our long-standing cooperation in recovering the Mexican wolf and this plan, based on the most current and best available science."

In comments delivered to FWS, AZGFD sought clarification on the state's authority to determine and implement release strategies, and detailed criteria for delisting the Mexican wolf as an endangered species.

The draft plan acknowledges that the latest scientific research and data are contributing to the ongoing success of Mexican wolf recovery in Arizona. It formally recognizes the wolf's historical range, which encompasses southeastern Arizona (south of Interstate 40), southwestern New Mexico and the nation of Mexico - where 90 percent of its historical habitat can be found.

Under the draft plan, AZGFD seeks to continue its efforts to increase Mexican wolf genetic diversity by strategically placing captive-born wolf pups into wild dens, a process known as "cross-fostering," as a viable way to infuse under-represented genetics into the wild population. 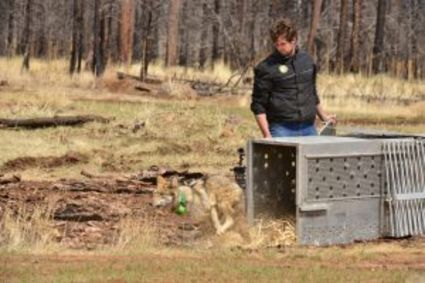 "Only 10 captive wolves (six of which were cross-fostered pups) have been released into the U.S. since 2009 and in that time the population has doubled, almost entirely because of natural reproduction," deVos wrote. "Cross-fostering minimizes the erosion of social tolerance due to the negative behaviors often associated with the release of captive-raised adults."

In June 2015, AZGFD filed a lawsuit against the secretary of the Department of Interior and the Fish and Wildlife Service seeking an updated recovery plan - a requirement of the Endangered Species Act as the current plan was last updated in 1982. In April 2016, the FWS signed a settlement agreement with AZGFD and Defenders of Wildlife to complete a final revised Mexican Wolf Recovery Plan by the end of November 2017.