What goes on at the watering hole at Cave Creek Regional Park doesn't necessarily always stay in the park. That's right, it could end up on Facebook! So, the parks critters should always make sure they're minding their Ps & Qs, and smile big for the camera as they take their Wildlife selfies.

It All Started With A Habitat

Several years ago, the park constructed a habitat for their resident desert tortoise, Piccolo. Along with a variety of vegetation, and a den for hibernation, the habitat features a water basin to ensure Piccolo stays well hydrated.

Each day when the ranger checked the watering hole, he noticed that the water level was lower than normal. Since Piccolo is a bachelor, the ranger began to wonder what was going on in the habitat and set up a game camera overlooking the watering hole to confirm his suspicions.

"I quickly learned that Piccolo had been doing quite a bit of entertaining," stated Ranger Mark Paulat, Cave Creek Regional Park. "Over the years, we've seen mule deer, Coyotes, javelinas, bobcats, gray fox, a bevy of birds and rabbits, Sonoran Desert toads, and great horned owls stop by to quench their thirst."

In-between offering interpretive programs and his daily ranger duties, Ranger Mark skims through the video footage to see if anything interesting is going on at the "water cooler," and posts it to the park's Facebook page. The clips range from eight to 35 seconds, and contain a host of characters.

Most of the animal's visiting the water hole are very skittish and tend to scan the brush for predators while grabbing a quick drink. Others, however, seem to sense the camera and will walk right up to it for a selfie.

The park does have a diva rabbit who insists on not having her photo taken and has been known to kick the camera away when she feels her privacy is being invaded. "The only thing predictable is the unpredictability. You just don't know what you're going to see from one recording to the next," added Paulat.

Who Is The Show's Star?

But, who is the real star of the show? Piccolo of course! It's his habitat. The majority of the critters visiting the watering hole seem to know that, and show him some respect when he's in the vicinity. It could also be because he sometimes bites their feet. 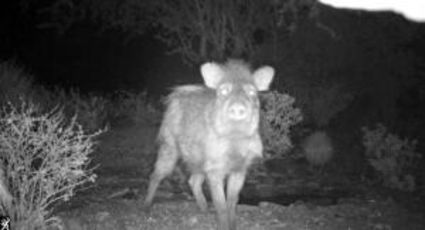 Several rising stars in the park include a great horned owl dubbed "The Queen" for her ability to run everyone out of the basin when she wants to play in the water, and a beautiful bobcat that stops by from time to time.

It's A 'Happening Place'

The watering basin is a happening place! To see for yourself, stop by Cave Creek Regional Park located at 37900 E. Cave Creek Parkway just off of 32nd Street and Carefree Highway. Or, visit the park's Facebook page at https://www.facebook.com/CaveCreekPark/.