Love What You Do! 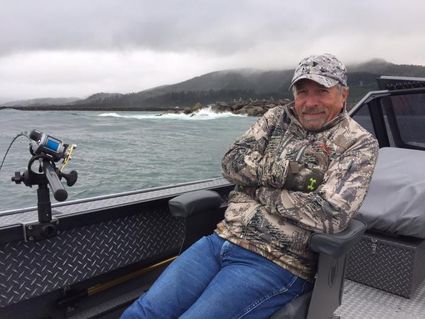 John Koleszar - DESERT DWELLER - As JK says, a "desert dweller" is not prepared for the cold temps of the Oregon coast. However, he had a remarkable and educational experience fishing for Chinook salmon.

I had an opportunity this past month to escape the looming desert heat and visit with my son in Portland, Ore. Part of our get together involved going salmon fishing in the Tilamook Bay area.

Yes, we did the usual tourist visit of the Tilamook cheese factory (smoked cheddar can't be beat) and yes, we hiked around in the massive pine forests that tower into the skies. The whole trip, however, centered around father-and-son time in a boat fishing for spring salmon.

The guide we chose was absolutely upfront and honest with us regarding the type of action we would be facing. He noted that there were few being boated but that when they did strike, you were in for an awesome battle. We decided to take a chance and with our friend Miguel along, the three of us headed to the marina and arrived at exactly 4:45 a.m.

Being a desert dweller does not prepare you for misty rain, blowing winds and 52-degree temperatures. We boarded the boat (a 26-foot "Willie boat") and headed out to the ocean. The fishing was as he had predicted, light activity and when they did hit, it was mad chaos.

An Interesting Tale To Tell

The day had some good moments followed with a lot of quiet times. At 2 p.m., we were back in the marina and unloaded our gear and headed back to our AirBnB home. Overall, the fishing was fun, educational and certainly cold. There was however an interesting story that I had to tell the followers of Western Outdoor Times.

Our guide's name is Daniel St. Laurent. From the moment we left the marina, he was a constant flow of information. We weren't just sitting and watching our rods for a strike. He kept us busy learning how to fish. He told us why we were fishing where we were and how the fish react at certain times of the year.

I came away with a distinct impression that here is a man who absolutely loves what he does. He was born to be a fishing guide. His knowledge of the water, his eye for details on what was happening around us and his constant attention to detail are impressive. What struck all of us, however, was how much he loved what he is doing.

Here is a man who wants to be out there hunting fish. I have fished with many people over the years and hunted with even more. There are people who are crabby, some who are professional, some who are business like and some who you can just tell do it for a living. Daniel does what he does because he loves doing it. 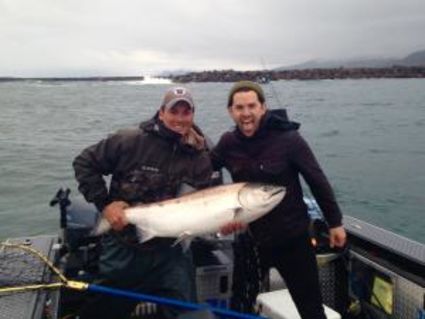 DESERT ESCAPE - JK Koleszar headed to Portland, Ore., to have father-son- time with his son and friend Miguel; the three boated Chinook salmon, keeping a 16-pounder. They also boated a 30-pounder but because it was a "wild" salmon, they could not keep it.

I learned about where the salmon were, why they were acting as they do, what they liked to eat and when they like to eat. We left the marina a half hour earlier than normal because he had noticed that there were more strikes in the first half hour than there were later, so at his suggestion rather than leaving at 5:30 a.m., we departed at 5 a.m.

The images I will have of him are of a man who is blessed to be doing what he loves and getting paid for it. Some people smile for the camera and you can tell it is forced.

Daniel is young, happy, doing what he loves and any halfway observant person can just feel his excitement heading out to the open water. There is a contagious feeling of excitement when you are doing something fun and different. Daniel exudes that same type of enthusiasm and has been doing it for many years. He is a blessed man - and a damn fine fishing guide!

If anyone is heading up to Oregon any time soon you might want to look into booking some time on the water with Daniel. He can be reached at stlaurentguideservice@hotmail.com