Text-Donation Campaign Asks Public To 'Be A Hero For Wildlife'

Public can text 'CRITTER' to 41444 to donate and support sick, injured and abandoned wildlife.

It's not another day at the local zoo. It's a typical day at the Arizona Game and Fish Department's Adobe Mountain Wildlife Center, where wildlife experts work daily to rehabilitate and save some of the state's 800-plus native wildlife species.

It's often a thankful, albeit costly, job.

To help defray rising costs of caring for Arizona's wildlife, AZGFD recently began its "Be a Hero for Wildlife" donation campaign to give the public an opportunity to support its efforts to treat sick, injured, orphaned and confiscated wildlife by texting CRITTER to 41444 from any smartphone.

"All this dedication and care comes at a great cost," said Mike Demlong, who manages AZGFD's Wildlife Center and Wildlife Education programs. "Many of the animals that come to us require extensive medical treatments, X-rays, monitoring and specialized care, and those expenses are considerable. It's rewarding work, especially when it comes to helping some of our younger, more vulnerable wildlife."

On April 14, it was a three-week-old bobcat kitten turned in by a member of the public, who intended to raise it as pet. The individual ultimately turned it over at the urging of a family member, who saw a Valley TV news story earlier that evening of a deer fawn that was kidnapped from the wild and being raised as a pet.

In both cases, each of the animals required extensive care, attention and resources just to keep them alive. The malnourished deer fawn alone continues to require a specialized diet, vitamin supplements and injections, and daily monitoring to make it healthy enough to eventually live out its days in a zoo.

Nearly one month later, the department has spent about $4,500 and counting to rehabilitate the kidnapped deer fawn. A six-day stay for the bobcat kitten cost the department $3,000.

"Unfortunately, the department does not receive state general fund dollars. That's what makes donations that much more important," Demlong said. 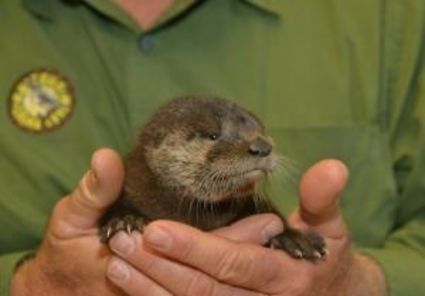 TEXT FOR CRITTERS -- The Arizona Game and Fish Department took in this four-week-old otter that was found last week abandoned at the bottom of a drying Valley canal. It's just one of the animals that AZGFD regularly works to rehabilitate. Those wanting to help fund the care it and other animals at that AZGFD Adobe Mountain Wildlife Center receive can text "CRITTER" to 41444.

Funding raised through the "Be a hero for Wildlife" text-campaign will be used to care for the sick, injured, orphaned and confiscated animals housed at the Wildlife Center, in addition to the many animal ambassadors – such as a great-horned owl, golden eagle, desert tortoises and prairie dogs – that are used in educational outreach statewide.

In addition to donations, the public can also help keep wildlife wild by leaving baby wildlife alone. Young wildlife is rarely abandoned so there is often little reason to "rescue it." One or both of its parents is likely nearby searching for food and will return.

Baby birds are the most common wildlife species encountered removed from the wild by the public. Young birds that have fallen from the nest can be placed back in the nest or as close as possible. Baby birds that are partially flighted should be left alone or moved nearby out of harm's way.

Those with questions about a specific situation should contact one of the wildlife rehabilitators listed on the department's Web site at: http://www.azgfd.com/wildlife/urbanrehab/ or contact your local Game and Fish office.