The Arizona Game and Fish Department is estimating there are more than 25,000 sandhill cranes in the Sulphur Springs Valley in southeastern Arizona, with the largest concentration of 15,343 at Whitewater Draw Wildlife Area in McNeal.

The Willcox Playa area has 8,291 cranes, the Safford Valley/Duncan area 846, Bonita 775, and there are less than 100 at Crane Lake and elsewhere in the area. Game And Fish conducted its annual crane count in the valley Jan. 6.

Whitewater Draw usually has the largest number of cranes, but a lack of runoff into the draw from the Mule Mountains as well as dense grass growth there resulted in the cranes seeking alternate roosts elsewhere in 2016. 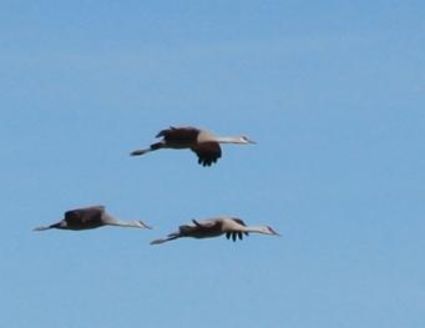 The bird-watching community and others recently contributed more than $11,000 to helping maintain the draw, a natural drainage, as a wetland. To contribute, go to https://draw.azgfd.gov/WhitewaterDonation.

The cranes usually fly out as a group at dawn to feed, gleaning grain from farmers' fields. Most of the cranes follow this feeding pattern, but some linger in or near their roosts. They return from feeding between 11 a.m. and 4 p.m.

The cranes typically begin to arrive in mid-September to early October. They begin to leave approximately mid-February, sometimes departing all at once, but others may stay until the middle of March.