Biologists with the Mexican Wolf Interagency Field Team (IFT) recently learned a fostered wolf pup introduced to a pack in 2014 has produced a wild offspring of her own.

In a critical breakthrough in Mexican wolf management, the U.S. Fish and Wildlife Service recently reported that a genetic test of male 1561 revealed that it is the offspring of male 1293 and female 1346. The female was one of two pups fostered into the den of the Dark Canyon Pack in New Mexico in 2014.

"We now have proof that a fostered pup not only survived to adulthood, but that it is reproducing and contributing genetically important young into the wild," said Jim deVos, assistant director of wildlife management for the Arizona Game and Fish Department. "This is fantastic news for the program and demonstrates that fostering Mexican wolves so they grow up wild is effective and provides a critical step forward for wolf recovery."

The Arizona Game and Fish Commission and department support this fostering technique that introduces very young pups from captivity and places them into a wild-born litter of the same age. The pups are then raised in the wild rather than captivity. 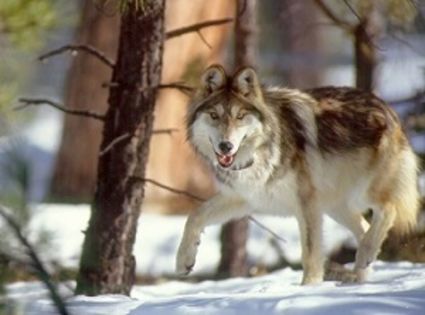 OFFSPRING -- A Mexican wolf walks through the snow. A recent genetic test of a male wolf revealed that it is the offspring of a previous wolf pup placed into a foster pack in 2014.

Critics of the commission's decision to restrict releases in Arizona solely to fostering pups argued that until these pups reproduce there would be no genetic rescue.

For more on The Mexican Wolf Reintroduction Project visit http://shakerattleandtroll.com/.