Randy Spray has been putting in for a bighorn tag for 43 years and had never drawn one. He told a friend, "I really need to draw a tag, I'm getting older and pretty soon I won't be able to do a bighorn hunt." That friend suggested that Randy try putting in for Rocky Mountain bighorn instead of Desert Bighorn, and that did the trick. He was already in the max bonus point pool, and this year he finally drew his tag for the archery hunt in 6A.

Shooting the ram was not a problem. Spray is an avid tournament archer with two golds in the Senior Olympics, and a ton of other archery titles as well. He started scouting almost three months before the hunt, and had zeroed in on an incredibly rugged area near Camp Verde in the Clear Creek Canyon. 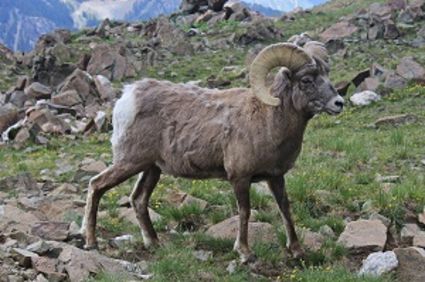 The night before the hunt, his buddy glassed the ram, and in the morning they hiked about a mile down to him. But the sheep had moved, and when they found the herd, an ewe got between Spray and the ram and he couldn't shoot. The ram walked off and my friend thought it was all over, but then the ram came back and he made a perfect shot. "The ram slid about forty yards, to within ten feet of going over a 100+ foot cliff. "

The Arizona Game and Fish have green scored the ram at 183 2/8 net. After the horns dry for 60 days it will be re-scored. The current state record of 176 4/8 is shared by two hunters, both of whom also shot their rams in 6A. A friend of his, a measurer for Pope and Young, scored Spray's ram at 181 net.