"I was watching this coyote flipping mice, early one morning at Gilbert Water Ranch," says Bryan Keil of Scottsdale, describing the instant he took the winning shot in this year's Wildlife photo contest.

Keil didn't just stumble across the scene: The Riparian Preserve at Water Ranch has a devoted following among Wildlife photographers, and many people knew Coyotes were hunting there. Keil was there, putting in the hours required to capture a special shot.

Tools Of The Trade

To this opportunity, he brought the tools of his trade: a good eye, time, concentration ... and a long lens. He took quite a few photos as the coyote hunted, but didn't check his camera until after it left.

He knew right away: "I was excited about this one." Keil, who also earned four honorable mentions in this year's contest for his masterful bird images, studies Wildlife behavior to improve his photography. "That way, you're ready when the moment comes."

More than 180 photographers entered this Wildlife photo competition, which is co-sponsored by the Arizona Game and Fish Department and Arizona Highways. Thirteen winning images are published in a full-size 2017 Wildlife calendar in the November–December 2016 issue of arizona wildlife views magazine, on sale now. Arizona Highways magazine will publish the best-in-show photo in 2017.

In addition to Keil, the other 12 winning photographers are the following:

Given the strength and diversity of this year's 1,900-plus entries, the judges singled out 38 more images from 27 talented photographers for honorable mention. These are also featured in arizona wildlife views magazine. The names of honorable mention photographers are posted on the photo contest's Web page, http://www.azgfd.gov/photocontest. News about next year's contest will also be posted there when it becomes available. 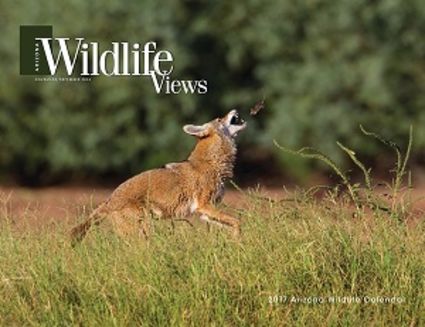 Arizona Game And Fish welcomes new subscribers to Arizona's award-winning magazine about Wildlife and outdoor recreation. The regular price is $8.50 for six issues (one year), but through Dec. 31, subscriptions are on sale at $7 for seven issues. They can be purchased at http://www.azgfd.gov/magazine.

Those who subscribe by Dec. 31 will be sure to receive the calendar issue showing this year's winners and honorable mentions. The calendar issue is also sold at all Game And Fish offices for $3.