The enclosed wetland was created, along with two new fish ponds, on the site of the original Pinetop Fish Hatchery that was built in the 1930s. Before the narrow-headed gartersnakes were introduced, the wetland was stocked with speckled dace and blueheaded suckers, to provide a food source for the snakes, and northern leopard frog tadpoles.

NAU provided the snakes that were raised in captivity, and provided valuable input on the wetland's role in maximizing gartersnake persistence, as well as post-release snake monitoring. 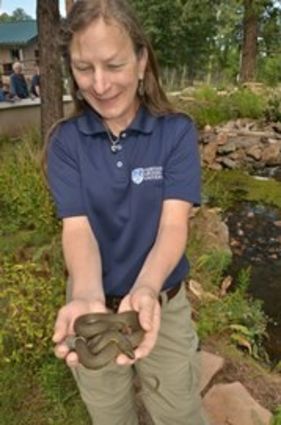 The decline of the narrow-headed gartersnake is attributed to nonnative species (especially crayfish), habitat loss, and effects from wildfires that have reduced the availability of prey fish.

A viewing platform was built to allow visitors to view the wetland and ponds at the AZGFD Pinetop regional office, located at 2878 E. White Mountain Blvd, Pinetop, Ariz.

The project is a cooperative effort between AZGFD, NAU, Arizona Heritage Program and the Natural Resources and Conservation Service.