An orphaned mountain lion cub rescued by Arizona Game & Fish now has a new home at Out of Africa Wildlife Park. The mountain lion cub that was rescued near Sells, Ariz., has recovered and was transported to its new permanent home.

On April 29, Chairman Edward Manual, of the Tohono O'Odham Nation, signed a letter permitting the transfer of the young mountain lion from its temporary home at Adobe Mountain Wildlife Facility to Out of Africa Wildlife Park in Camp Verde, Ariz.

Into The Wild: Not An Option

Releasing the orphaned cub back into the wild was not an option, as young mountain lions rely on their mothers in order to learn hunting and survival skills until they are between 1 year to 18 months old.

Since 1986, Out of Africa has frequently assisted the Arizona Game and Fish Department in large animal rescue situations. Two years ago, the department confiscated two illegally owned tigers in Phoenix that have since come to be visitor favorites at the park.

Representatives from Out of Africa and Arizona Game & Fish will be available for interviews and questions by appointment only. For more information, contact: Amy Burnett (480) 235-5356 (cell) Information and Education Program Manager Arizona Game and Fish Department

The cougar (Puma concolor), also commonly known as the mountain lion, puma, panther, or catamount, is a large felid of the subfamily Felinae native to the Americas. Its range, from the Canadian Yukon to the southern Andes of South America, is the greatest of any large wild terrestrial mammal in the Western Hemisphere.

An adaptable, generalist species, the cougar is found in most American habitat types. It is the second-heaviest cat in the New World, after the jaguar. Secretive and largely solitary by nature, the cougar is properly considered both nocturnal and crepuscular, although sightings during daylight hours do occur.

The cougar is more closely related to smaller felines, including the domestic cat (subfamily Felinae), than to any species of subfamily Pantherinae, of which only the jaguar is native to the Americas.

The mountain lion/cougar is an ambush predator and pursues a wide variety of prey. Primary food sources are ungulates, particularly deer, but also livestock. It also hunts species as small as insects and rodents. This cat prefers habitats with dense underbrush and rocky areas for stalking, but can also live in open areas.

The cougar is territorial and survives at low-population densities. Individual territory sizes depend on terrain, vegetation, and abundance of prey. While large, it is not always the apex predator in its range, yielding to the jaguar, gray wolf, American black bear, and grizzly bear. It is reclusive and mostly avoids people. Fatal attacks on humans are rare, but in North America have been increasing in recent years as more people enter their territories.

Prolific hunting following European colonization of the Americas and the ongoing human development of cougar habitat has caused populations to drop in most parts of its historical range. In particular, the cougar was extirpated in eastern North America in the beginning of the 20th century, except for an isolated Florida panther sub-population.

Breeding populations have moved east into the far western parts of the Dakotas, Nebraska, and Oklahoma. Transient males have been verified in Minnesota, Missouri, Wisconsin, Iowa, the Upper Peninsula of Michigan, and Illinois, where a cougar was shot in the city limits of Chicago and, in at least one instance, observed as far east as coastal Connecticut. Reports of eastern cougars still surface, although it was declared extirpated in 2011.

Only females are involved in parenting. Female cougars are fiercely protective of their cubs, and have been seen to successfully fight off animals as large as grizzly bears in their defense. Litter size is between one and six cubs; typically two. Caves and other alcoves that offer protection are used as litter dens.

Born blind, cubs are completely dependent on their mother at first, and begin to be weaned at around three months of age. As they grow, they begin to go out on forays with their mother, first visiting kill sites, and after six months beginning to hunt small prey on their own. Kitten survival rates are just over one per litter. When cougars are born, they have spots, but they lose them as they grow, and by the age of 2 1/2 years, they will completely be gone.

Young adults leave their mother to attempt to establish their own territory at around two years of age and sometimes earlier; males tend to leave sooner. One study has shown high mortality amongst cougars that travel farthest from the maternal range, often due to conflicts with other cougars (intraspecific competition).

Research in New Mexico has shown that "males dispersed significantly farther than females, were more likely to traverse large expanses of non-cougar habitat, and were probably most responsible for nuclear gene flow between habitat patches."

Life expectancy in the wild is reported at eight to 13 years, and probably averages eight to 10;

Although cougars somewhat resemble the domestic cat, they are about the same size as an adult human. Cougars are slender and agile members of the cat family. They are the fourth-largest cat. However, despite its size, it is not typically classified among the "big cats", as it cannot roar, lacking the specialized larynx and hyoid apparatus of Panthera.

Compared to "big cats", cougars are often silent with minimal communication through vocalizations outside of the mother-offspring relationship. Mountain lions sometimes voice low-pitched hisses, growls, and purrs, as well as chirps and whistles, many of which are comparable to those of domestic cats. They are well known for their screams, as referenced in some of their common names, although these screams are often misinterpreted to be the calls of other animals. 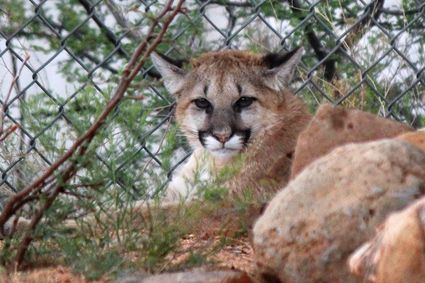 In North America, mythological descriptions of the cougar have appeared in the stories of the Hocak language ("Ho-Chunk" or "Winnebago") of Wisconsin and Illinois and the Cheyenne, amongst others. To the Apache and Walapai of Arizona, the wail of the cougar was a harbinger of death. The Algonquins and Ojibwe believe that the cougar lived in the underworld and was wicked, whereas it was a sacred animal among the Cherokee.

The World Conservation Union (IUCN) currently lists the cougar as a "least concern" species. The cougar is regulated under Appendix I of the Convention on International Trade in Endangered Species of Wild Fauna and Flora (CITES), rendering illegal international trade in specimens or parts.