The Beginning Of Jousting

Come See The Classical Sport At The Ren Faire

The origins of jousting are believed to be in classical Rome, but the "sport" rose to its greatest popularity in Europe by the 1400s. It all evolved from mock battles in which knights on horseback, assisted by foot soldiers, formed into teams and charged at each other in some wide meadow.

The result was a "melee" (the word hasn't changed in a millennium) of shattered lances, clanging swords, flailing arms and legs - astride and afoot - that went on all day and into the night. The earliest recorded melee was in 1066 A.D., though mock combat had probably been around for at least a century by then.

At first, the battles served more to hone fighting skills than to provide popular diversion. But in peaceful times, a knight needed a way to retain his skills. The Jousts were great money-makers for the victors; instead of claiming mere points, the winning team held the losers for ransom, often accepting their horses and armor as payment.

The many deaths which resulted from such "sport" let Popes and English kings to ban jousting tournaments, though English subjects often persisted and were repeatedly excommunicated. The tournaments had become a featured attraction at any kind of market faire or other significant gathering. At the height of their popularity, jousts rivaled a state fair, Super Bowl, rock concert and Octoberfest all rolled into one. 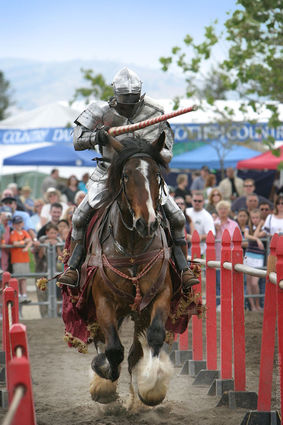 By the middle 1200s, the joust emerged as the favored way to prove which of two (or more) knights was better. Most contests were a "Joust a Plaisir" (for pleasure) in which a winner was declared on the basis of points scored, though some were still conducted "a l'Outrance" (to the death). In the sporting version, the knights' swords were dulled and their lances tipped with "coronals" (little crowns) to prevent their penetrating a joint in the armor. Some authorities believe that the lances were deliberately weakened, a precaution still in effect today.