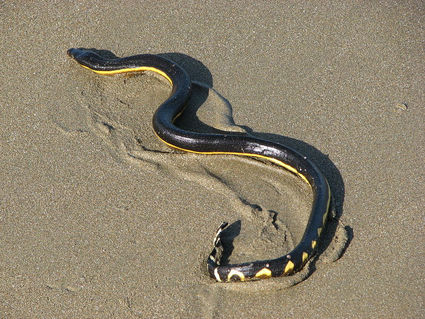 Rule 13, if it has no shoulders or eyebrows, don't mess with it!

Captain Jared Stubbs, Sea Tow San Diego, reported rumors of a poisonous sea snake washing ashore in Southern California. Since, sources from Heal the Bay has confirmed that the exotic and incredibly venomous sea snake has been spotted off the Oxnard coast line.

The sea snake, Pelamis platurus, approximately 2-feet in length and more commonly known as the yellow-bellied sea snake, was found at the Silver Strand Beach in Oxnard, Calif., by a surfer at high tide on Oct. 16.

According to the Natural History Museum of Los Angeles County, it's the first known report of this species in Ventura County and the northernmost record along along the Pacific Coast of North America. The sea snake died shortly after being transported to the U.S. Fish and Wildlife Service in Ventura County. The sea snake is being analyzed and tissue samples undergoing DNA sampling.

This type of serpent was last seen in California (specifically, in San Clemente during the 1983 El Nino). The sea snake is more common in warm waters Mexico and coastal region of Africa, Asia and off Australia.

( Question: What's to blame: El Nino, global warming or Al Gore?) Warmer ocean temperatures could have enticed the creature to swim north in order to find small fish and eels.

Sources at Heal Bay report that the sea snake is highly venomous The black-and-yellow snake is more common in the waters near Baja California. Experts say the highly venomous snake is unlikely to attack unless grabbed or attacked.

Officials are warning the public not to touch or try to capture these types of sea snakes, rather photograph the serpent, record the actual location with GPS way points on your smart phone and report it immediately. Be advised this sea snake is highly venomous and deadly!