The State of Arizona and Office of the Arizona Attorney General early last month filed a motion to intervene in a lawsuit brought by several groups in July against the U.S. Fish and Wildlife Service (Service). The lawsuit challenges some aspects of the Service’s revised 10(j) rule that governs the management of Mexican wolves in Arizona and New Mexico. 2013_MW_in_wild_IFT_web.jpg

“The Arizona Game and Fish Department took this action to defend the state’s interests with respect to the Service’s revised 10(j) rule for Mexican wolves. The parameters in the revised 10(j) rule use sound scientific principles and address critical stakeholder concerns, one of the primary obstacles to successfully reestablishing Mexican wolves,” said Larry Voyles, director of the Arizona Game and Fish Department.

“The groups that filed the suit against the U.S. Fish and Wildlife Service on this aspect of the reintroduction project lack an on-the-ground perspective of what changes will have the highest likelihood of success for Mexican wolves.”

The Service worked extensively with Arizona Game and Fish, as required by the Endangered Species Act (ESA), to develop the revised 10(j) rule. The coordination that took place between the Service and Game and Fish sought to balance the needs and interests of the Mexican wolf reintroduction project, local stakeholders and all other wildlife species held in trust by the department. The changes reflected in the revised 10(j) greatly increase the contribution made within the American Southwest to overall Mexican wolf recovery, which is a requirement of the ESA.

The lawsuit filed by WildEarth Guardians and others in July alleges the Service’s cooperation with the department is a violation of federal law.

One of the points criticized in the revised 10(j) rule concerns expansion of the area to be occupied by Mexican wolves. In recommending the expansion of the 10(j) area by more than eight-times its previous size, the department used extensive biological studies to guide its recommendation for westward expansion of wolves in Arizona.

Studies clearly indicate a relatively sparse ungulate population in western Arizona that is inadequate for supporting wolves. To allow wolves in the initial phase of expansion to disperse and occupy areas with limited prey is likely to lead to more conflicts between wolves and humans and domestic animals while providing limited value to wolf conservation. 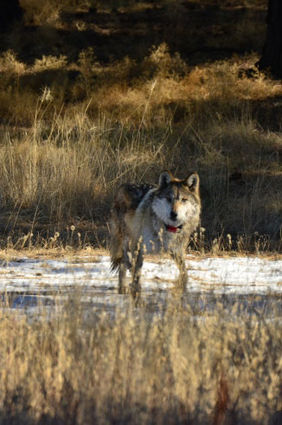 ESA also maintains that a sub-species/ species should only be re-established within its historical range, which the revised 10(j) rule accomplishes. The new rule will allow wolves a corridor to disperse into Mexico. Interconnection between wolves in Mexico and those in the Arizona-New Mexico population will increase genetic diversity..