California condor conservation achieved a milestone last hunt season with a record number of big game hunters in the species' core range voluntarily using non-lead ammunition or removing lead-infected gut piles from the field to prevent condors from feeding on them.

Now, condor reintroduction partners are expanding voluntary lead reduction efforts towards new groups that can also help keep condors from ingesting lead as the birds scavenge carcasses other than big game that might contain lead.

New groups being targeted in expanded education and outreach efforts include small game, bird and varmint hunters, and those that dispatch sick or injured animals in the field, such as ranchers or law enforcement agencies.

Last season, annual trapping and testing of condors from the Arizona-Utah population revealed a slight increase in the percent of birds with toxic blood-lead levels from the previous year which begged the question, "Where else could condors be getting lead?" Fifty-five of the 73 condors tested over the winter and early spring showed unsafe levels of lead in their blood.

Nearly one-third of those birds had extreme, life-threatening toxicity levels. Over the years, lead poisoning has accounted for just over 50 percent of all condor deaths.

Assistance Needed From Everyone

Chris Parish, condor recovery program director for the non-profit that monitors the condors, The Peregrine Fund, stated, "Even a few lead-tainted carcasses can poison multiple condors because they feed in groups. Big game carcasses aren't the only pathway for the birds to access lead fragments - we use all sorts of lead-based ammunition for different types of hunting, even domestic uses when we put down wounded Wildlife or domestic animals like cows, horses and sheep.

We need assistance from everyone who shoots animals whose remains might otherwise be left in the field, where scavengers like condors can get to the carcasses."

Potential sources of lead can often be pinpointed by analyzing what is found in the dead condors' stomachs. Of the 30 documented cases of lead-caused death in condors over the years, 21 contained evidence of ammunition in their gut, suggesting the birds consumed animals that were shot with various types of ammunition.

The Arizona Game and Fish Department embarked on an unprecedented voluntary lead-reduction campaign aimed at big game hunters 10 years ago. In the early years, the department worked to educate and ask for voluntary participation from primarily deer hunters on the Kaibab Plateau because data showed that's where the majority of condors were feeding when lead exposure occurred.

The Utah Division of Wildlife Resources instituted a similar voluntary program in 2010. Exposure to lead has continued, however, because the condors have extended their range. The birds now feed regularly on a variety of domestic and wild animal carcasses in both Arizona and Utah.

"The Kaibab deer hunters should be commended for voluntarily reducing the lead available to condors. We're now working to share the same message with new groups of shooters that have the potential to greatly influence the success of the condor reintroduction program. Hunters are the original conservationists, and we are confident that varmint, small game and bird hunters will also step up to help when asked," said Allen Zufelt, condor program coordinator for Arizona Game And Fish.

In addition to Arizona and Utah's lead-reduction efforts, The Peregrine Fund is working with Native American tribes to extend the message and increase lead-reduction efforts on tribal lands. All of these efforts are undertaken with the support of the U.S. Fish and Wildlife Service, which coordinates condor recovery actions. 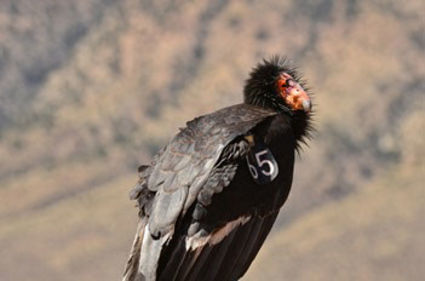 For more information on condors and lead, visit http://www.azgfd.gov/condor and http://www.peregrinefund.org/condor.