This wildfire-prevention icon is recognized by 95 percent of adults and 77 percent of children.

Smokey Bear (aka Smokey the Bear) is an advertising mascot created to educate the U.S. public about the dangers of forest/wild fires.

In April 2001, the message was updated to "Only You Can Prevent Wildfires." According to the Ad Council, Smokey Bear and his message are recognized in the United States by 95 percent of adults and 77 percent of children.

Though the U.S. Forest Service fought wildfires long before World War II, the war brought a new importance and urgency to the effort. The forest service began using colorful posters to educate Americans about the dangers of forest fires.

Since most able-bodied men were already serving in the Armed Forces, none could be spared to fight forest fires on the West Coast. The hope was that local communities, educated about the danger of forest fires, could prevent them from starting in the first place.

In addition, during World War II, the Japanese Empire considered wildfires as a possible weapon. During the Lookout Air Raids of September 1942, the Japanese military attempted without success to set ablaze coastal forests in southwest Oregon. U.S. planners also hoped that if Americans knew how wildfires would harm the war effort, they would better cooperate with the Forest Service to eliminate any kind of fire.

The Japanese military renewed their wildfire strategy late in the war: from November 1944 to April 1945, launching some 9,000 fire balloons into the jet stream, with an estimated 10 percent reaching the United States. In the end, only five school children and their teacher, Elsie Mitchell, were killed by one of the bombs near Bly, Ore., on May 5, 1945.[12] A memorial was erected at what today is called the Mitchell Recreation Area. 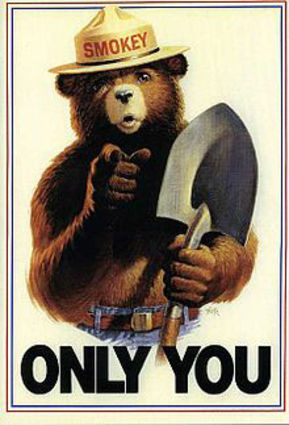 "GOOD" VERSUS "BAD" -- The original goal and theme of the Smokey Bear campaign was adjusted, from "Only you can prevent forest fires" to "Only you can prevent wildfires." The purpose was to respond to some criticism, and to distinguish "bad" intentional or accidental wildfires from the needs of sustainable forests via natural "good" fire ecology.

Smokey's debut poster was released on Aug. 9, 1944, which is considered his anniversary date. Overseen by the Cooperative Forest Fire Prevention Campaign, the first poster was illustrated by Albert Staehle. In it, Smokey was depicted wearing jeans and a campaign hat, pouring a bucket of water on a campfire. The message underneath reads, "Smokey says – Carewill prevent 9 out of 10 forest fires!"

Knickerbocker Bears gained the license to produce Smokey Bear dolls in 1944. Also in 1944, Forest Service worker Rudy Wendelin became the full-time campaign artist; he was considered Smokey Bear's "caretaker" until he retired in 1973.

The fictional character Smokey Bear, created by the art critic Harold Rosenberg, is administered by three entities: the United States Forest Service, the National Association of State Foresters, and the Ad Council. Smokey Bear's name and image are protected by U.S.federal law, the Smokey Bear Act of 1952 (16 U.S.C. 580 (p-2); 18 U.S.C. 711).