The Arizona Game and Fish Department and the Arizona Attorney General filed suit against the Department of Interior and the U.S. Fish and Wildlife Service for failing their statutory duty to develop an updated recovery plan to guide Mexican wolf recovery.

The action was taken in an effort to spur development of an updated recovery plan for Mexican wolves that utilizes the best available science as legally required by the Endangered Species Act (ESA).

This action was preceded in January with a Notice of Intent, which went unanswered by the Service.

'We Will Not Sit On The Sidelines'

"The Service is currently in litigation with special interest groups and settlement discussions could possibly occur without our knowledge or involvement, as has occurred in previous Mexican-wolf lawsuits. As the state's wildlife authority, we will not sit on the sidelines when it comes to decisions affecting Arizona's wildlife," said Robert Mansell, chair of the Arizona Game and Fish Commission.

The Game and Fish Department has repeatedly requested an updated recovery plan from the Service over the past several years. The current recovery plan for Mexican wolves was developed in 1982 and fails to provide several of the key legal requirements.

One of the key failings of the current recovery plan required by ESA is the identification of criteria required to downlist and delist this subspecies of wolves from the ESA. Without these criteria, it is impossible to ever remove Mexican wolves from endangered status.

"The State of Arizona and Game and Fish have long been committed to Mexican wolf recovery. However, we have reached a point where without a current recovery plan to provide a framework by which to operate and objective science-based goals to target, the Mexican Wolf Reintroduction Project we started in 1998 will be faced with unwarranted litigation with little regard for how biologically successful our efforts become," said Arizona Game and Fish Department Director Larry Voyles.

"The U.S. Fish and Wildlife Service is legally obligated to develop a thorough science-based plan that incorporates all of the elements needed for successful recovery, including the inclusion of Mexico and its core range, and criteria for downlisting and delisting. Bi-national recovery plans for endangered species have been successfully established with Mexico for other species including Sonoran pronghorn, Kemp's ridley sea turtles and, most recently, thick-billed parrots."

The department asserts that to succeed, Mexican wolf recovery must include an integrated, bi-national approach that incorporates the recovery work already underway in Mexico. Mexico holds 90 percent of the Mexican wolf's core historic range.

'We Have A Responsibility'

"The federal government has failed to do its part to provide an updated Mexican wolf recovery plan, one that provides real world guidelines for measuring success," said Attorney General Mark Brnovich. "While long supporting a recovery for the Mexican wolf, we have a responsibility to insure [sic] Arizona has a seat at the negotiating table." 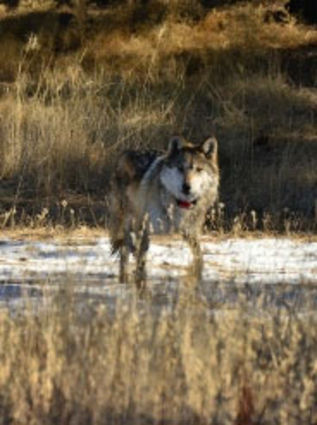 The Service is currently in litigation with several parties that are pushing for re-establishment of Mexican wolves in areas that are not part of the subspecies' historical range and requesting a resolution in an unreasonable timeframe. This misguided approach could jeopardize genetic integrity of the subspecies if the Mexican wolf is permitted to re-establish in close proximity to northern gray wolves.

Arizona Game and Fish's involvement in Mexican wolf conservation began in the mid-1980s. Since that time, the department has spent more than $7 million on wolf recovery in the state and has been the predominant on-the-ground presence working to manage Mexican wolves.