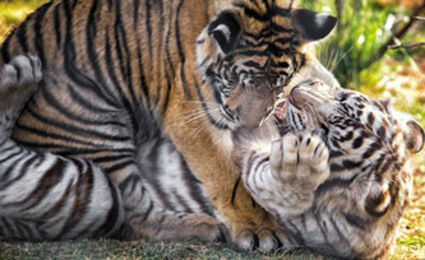 One White, One Orange Juvenile

The Arizona Game and Fish Department first received a call to its Operation Game Thief (OGT) hotline on Dec. 27, 2013 reporting that a Valley man had posted photos on a social media site of two young tigers that he claimed to own.

Upon investigation, Game and Fish officers discovered photos of a white juvenile tiger and an orange juvenile tiger. The photos were taken at Rafi's business, Phoenix Tires and Wheels Outlet, and two Phoenix-area residences.

Four days later, the department received an anonymous tip reporting a juvenile tiger in the backyard of a Phoenix home. Responding Game and Fish officers found the orange tiger tied with a dog leash on the back patio of the residence.

The home owner indicated that the tiger belonged to Rafi and provided further details about the white tiger, which was reportedly being held somewhere in Gilbert. Officers seized the orange tiger and transferred it to Southwest Wildlife Conservation Center for temporary holding.

Final disposition of the tigers will be determined at the conclusion of the criminal case against Rafi.

Now At Out Of Africa

Department investigators tracked the location of the second (white) tiger to a residence in Gilbert. The animal was tied to a rope in the backyard. It was seized and also taken to Southwest Wildlife for holding. Reports indicate that the tigers are littermates. Both tigers have since been transferred to Out of Africa Wildlife Park for temporary housing until the case is resolved.

Wildlife officials repeatedly attempted to contact Rafi throughout the investigation, but he was uncooperative, and all efforts failed.

This investigation was made possible because citizens reported the incident to Operation Game Thief. If you suspect or have knowledge of illegal activity involving wildlife or habitat, call Operation Game Thief at (800) 352-0700. Callers may remain anonymous.