The Arizona Game and Fish Department was finishing a successful program to help the state's struggling antelope population. The department conducted lethal removal of Coyotes until mid-April, to improve low fawn survival documented in the antelope herd in Game Management Unit 21.

The removal efforts have been conducted in limited areas of Unit 21, located north of the Phoenix metropolitan area. Arizona's antelope populations have been struggling due to drought and other factors. The department is trying to help antelope in specific areas where herd declines have been severe. Coyote predation management will also help mule deer fawns in the unit.

"Fawns are most susceptible to predation during the first few weeks of life. Our intent is to reduce the predation to provide newborn fawns a window of survivability," says April Howard, Game And Fish Department predator, furbearer and large carnivore biologist. "Reducing predation will give newborn fawns a chance to survive long enough so they can escape predators."

Biologists say other factors impacting pronghorn and mule deer populations in the state include loss of habitat, due to development or from encroachment of woody plants, and habitat fragmentation due to road building and fences. 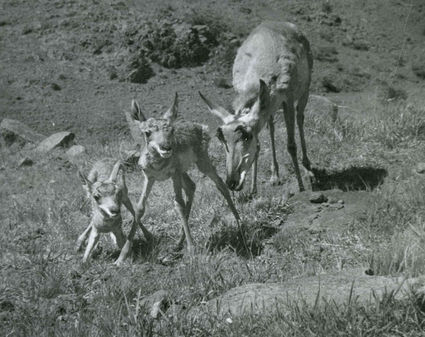 "Research has clearly and repeatedly shown that coyote-caused fawn predation can be a significant limiting factor affecting pronghorn fawn survival and recruitment rates," says Howard. "It is particularly devastating to populations facing other habitat-related challenges, such as the long-term drought."

Predator control has been a short-term effort to assist antelope herds in trouble. These efforts are part of a much larger project that addresses habitat quality within the unit by thinning encroaching juniper and installing water catchments.