Some points of an often-controversial issue are discussed and updated.

The following news release was issued jointly by the Arizona Game and Fish Department and U.S. Fish and Wildlife Service: Population survey shows a 31 percent increase in the population.

The Mexican Wolf Interagency Field Team (IFT) has completed its annual year-end population survey for endangered Mexican wolves and documented a minimum of 109 animals in the wild in Arizona and New Mexico at the end of 2014.

This is a 31 percent increase over the previous year and the fourth consecutive year with at least a 10 percent increase in the known population. There were a minimum of 83 wild wolves identified in the 2013 survey.

"In 1982, the Mexican wolf recovery team recommended a population of at least 100 animals in the wild as a hedge against extinction; until we initiated the first releases in 1998, there had been no Mexican wolves in the wild in the United States since the 1970s," said Southwest Regional Director Benjamin Tuggle. "Although there is still much to be done, reaching this milestone is monumental!"

According to Arizona Game and Fish Director Larry Voyles, "This survey demonstrates a major accomplishment in Mexican wolf recovery. In 2010, there were 50 Mexican wolves in the wild; today there are 109, a more than doubling of the population in Arizona and New Mexico.

"With our Mexican wolf population consisting of wild-born wolves, we expect the growth rates observed this year to continue into the future. In spite of considerable naysaying, our 10(j) program has been a success because of on-the-ground partnerships. We have every reason to believe that our efforts at reintroduction will continue to be successful."

In spring of 2014, the field team successfully implemented a technique in which genetically valuable pups were transferred to a similarly aged litter of an established pack. The IFT captured one of the two pups that were placed in the established pack during the 2014 survey, which confirmed that this "cross-fostering" technique is an additional method for improving the genetics of the wild population.

The IFT also conducted 14 releases and translocations of wolves last year, some of which provide promise for improving the wild population's genetic health in the future.

"Testing and implementing new management techniques, such as cross-fostering, can help us improve the genetics of the wild population," said Tuggle. "The experimental population is growing - now our strategy is to focus on establishing a genetically robust population on a working landscape."

The survey results reflect the end-of-year minimum population for 2014. Results come from data collected on the ground by the IFT from November through December of 2014, as well as data collected from an aerial survey conducted in January and February of 2015. This number is considered a minimum number of Mexican wolves known to exist in the wild in Arizona and New Mexico as other Mexican wolves may be present but uncounted during surveys.

The aerial survey was conducted by a fixed-wing aircraft and helicopter. Biologists used radio-telemetry and actual sightings of wolves to help determine the count. The results from the aerial survey, coupled with the ground survey conducted by the IFT, confirmed that there are a total of 19 packs, with a minimum of 53 wolves in New Mexico and 56 wolves in Arizona.

The 2014 minimum population count includes 38 wild-born pups that survived through the end of the year. This is also considered a minimum known number since it might not reflect pups surviving but not documented.

For more information on the Mexican Wolf Reintroduction Program, visit: http://www.fws.gov/southwest/es/mexicanwolf/ or http://www.azgfd.gov/wolf.

The Arizona Game and Fish Commission has voted to support federal officials' new 10(j) rule for Mexican wolves. Some groups critical of the rule are said to lack on-the-ground field perspective of what changes will lead to success

The Arizona Game and Fish Commission voted recently to intervene in a lawsuit filed by environmental groups earlier this year against the U.S. Fish and Wildlife Service. The lawsuit is over the Service's recently-revised 10(j) rule that governs the management of Mexican wolves in Arizona and New Mexico.

"It's important that this action is not confused with the department's recent action meant to encourage the Service's development of a new recovery plan. The 10(j) rule and the recovery plan are designed to address very different aspects of Mexican wolf recovery."

The regulations implementing the Endangered Species Act require the Service to work with a state's wildlife agency to develop an acceptable rule revision. The negotiations that took place between the Service and the Game and Fish sought to balance the needs and interests of the Mexican wolf reintroduction project, local stakeholders and all other wildlife species held in trust by the department.

The department provided its points of concern with possible resolutions to the Service in December 2013, allowing the Service sufficient time to incorporate the changes into the preferred alternative before issuing the draft Environmental Impact Statement. The lawsuit filed by the Center for Biological Diversity last month considers the Service's cooperation with Arizona Game and Fish Department a violation of federal law.

"The department is committed to re-establishing wolves in Arizona and the new 10(j) rule will help us do that through the use of valid science, accurate historical perspective and consideration for the changes to the modern landscape that make it impractical to recreate a wolf population as it was a century ago," said Jim deVos, assistant director for wildlife management at the Arizona Game and Fish Department.

The new 10(j) rule lays out some of the steps to guide Mexican wolf conservation on the ground, while the recovery plan provides a broader approach to guide the program to a defined recovery goal.

The department notified the Service that it intends to take legal action to try to push the development of a recovery plan for Mexican wolves as the current plan is more than 30 years old and so outdated that it fails to provide a necessary framework for the program.

One of the points criticized in the new 10(j) rule concerns expansion of the Mexican wolf population. The department used extensive biological studies to guide the recommendation for westward expansion of wolves in Arizona. Studies clearly indicate a relatively sparse ungulate population in western Arizona that is inadequate for supporting wolves.

To allow wolves in the initial phase of expansion to disperse and occupy areas with limited prey is likely to lead to more conflicts between wolves and humans and domestic animals. The department recommended against initial expansion into these areas to avoid conflict that may necessitate the removal of wolves. 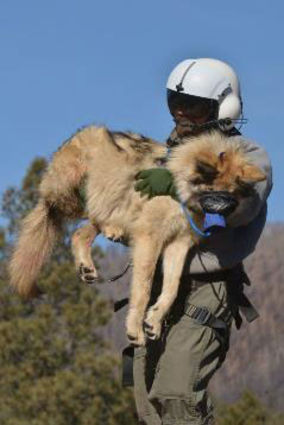 Historically, Mexico held 90 percent of the habitat for Mexican wolves and it still contains significant areas that could support wolves. True recovery can only occur if both Mexico and Arizona have viable, sustainable wolf populations.

The new rule will allow wolves a corridor to disperse into Mexico. Interconnection between wolves in Mexico and those in the Arizona-New Mexico population will increase genetic diversity.