Arizona's Wildlife Can Benefit From Your Donation At Tax Time

Taxpayers can help conserve bald eagles, wolves, and tortoises, among others.

Did you know that your state taxes do not support the conservation of Arizona's wildlife, but your donations do? Taxpayers can help the state's wildlife at tax time by "making a mark" on their state income tax form.

"Since Game and Fish does not receive any general fund dollars, the Arizona Wildlife Fund provides important support for managing and conserving some of the state's most iconic native species," says Mike Rabe, non-game wildlife branch chief for the Arizona Game and Fish Department.

"The fund goes only to nongame species that are not hunted or fished, and the cumulative effect of even a dollar can have a tremendous impact on conserving one of Arizona's greatest natural treasures - its wildlife."

Arizona is one of 41 states that allow taxpayers to make a contribution to worthwhile causes. Since Arizona started the program more than 25 years ago, taxpayers have donated more than $5 million to the conservation of nongame wildlife. 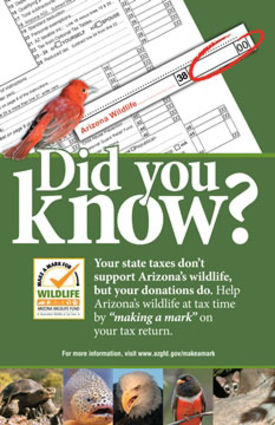 The Arizona Wildlife Fund box can be found on line "64" of the state's long income tax form, or line "33" of the short tax form.

The Arizona Game and Fish Department has trust responsibility for managing more than 800 native wildlife species – the most of any inland state – for current and future generations of Arizona citizens. http://www.azgfd.gov/h_f/northamericanmodel.shtml