Forest Lakes is a small unincorporated community in Coconino County in the northern part of the U.S. state of Arizona. It is located on the edge of the Mogollon Rim and is in close proximity to several recreational lakes within the Apache-Sitgreaves National Forest, and is named for such. 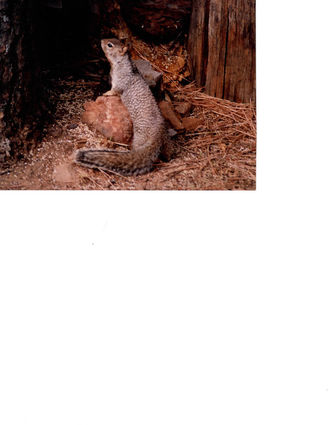 We are fortunate to have a friend who has a beautiful home in Forest Lakes. Geri took the picture of this squirrel in her yard.

As an unincorporated community, Forest Lakes does not have defined boundaries. The Forest Lakes Estates subdivision as recorded on the Coconino County Assessor's maps, has an area of approximately 1.89 square miles (4.9 km2).

According to the Köppen Climate Classification system, Forest Lakes has a warm-summer Mediterranean climate, abbreviated "Csa" on climate map.