"SAGE Society wants to recognize the important role that volunteers play in Wildlife conservation and encourage all Arizona citizens to consider the role they can play in helping conserve and protect Arizona's wildlife," said O'Brien. "We felt that Jerry's tireless efforts should be publicly acknowledged and that there should be an award to express appreciation for individuals who demonstrate significant contributions towards conserving the state's wildlife."

Ostwinkle is a master eagle falconer that is nationally known for his expertise in working with and rehabilitating bald and golden eagles. He is the volunteer eagle education and rehabilitation coordinator for Arizona Game and Fish Department's Adobe Mountain Wildlife Center in Phoenix.

He has been volunteering at the center for nearly 30 years and annually spends more than 300 days per year there. Among many other efforts, in early 2014, he helped rehabilitate three golden eagles and prepare them for release back into the wilds of Arizona.

"The Adobe Mountain Wildlife Center is incredibly fortunate to have Jerry's expertise at hand and his willingness to volunteer so many hours towards helping rehabilitate and conserve Arizona's eagles," said Mike Demlong, Game And Fish's Wildlife education program manager.

Over thirty years ago, Arizona Game And Fish opened the first state-run Wildlife rehabilitation and education center in the nation. Today, the center has provided Wildlife triage, treatment and rehabilitation to more than 30,000 sick or injured animals and delivered Wildlife education programs to millions of people at events and schools.

Its original focus, when founded in 1983, was on treating and rehabilitating sick and injured Wildlife. While the center still continues to provide care to wild animals, it also focuses heavily on educating the public about Arizona's diverse native Wildlife. Ultimately, the center strives to rehabilitate Wildlife for return to the wild, but in instances where an animal cannot be rereleased, the center may use them as educational Wildlife ambassador. 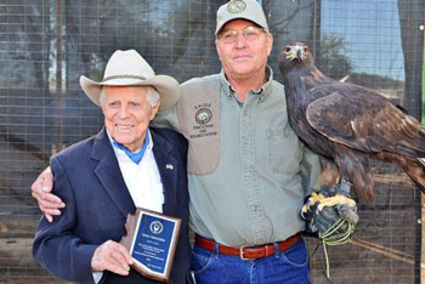 OSTWINKLE HONORED -- Rehabilitating and handling golden and bald eagles is an art, an art that volunteer Jerry Ostwinkle has mastered. This weekend, Ostwinkle's eagle conservation work and efforts to educate the public about eagles was recognized by SAGE Society (Sonoran Antelope and Golden Eagle Society) with the first-ever Jerry Ostwinkle Golden Eagle Conservation Award named in his honor.

SAGE Society (formerly the International Sonoran Antelope Foundation) is a non-profit Arizona corporation established in 1995. Its mission is to conserve and protect Arizona's Wildlife; provide the public with information and resources on Wildlife conservation; and support and encourage public participation in this worthwhile endeavor. SAGE Society is a member of Teaming with Wildlife Coalition, the largest and most diverse U.S. coalition ever assembled in support of Wildlife conservation legislation.

For more information, resources, and opportunities on how you can help conserve and protect Arizona's Wildlife, please contact SAGE Society at SAGE@cox.net or visit http://www.azgfd.gov/wildlifecenter.

Hurray for Jerry! His tireless devotion to Golden Eagles and wildlife in general comes full circle. Our world and our animal co inhabitants have benefited from his passion for justice and what is best for eagles. Congratulations Jerry! Chuck Dwyer 2522040398