As days shorten, more motorists are on the roadway at dawn and dusk.

More people are now on the roads at the time of day when Wildlife can be difficult to see: dusk.

The sun is setting and the shadows make many species of Wildlife particularly difficult to spot, and the Arizona Game and Fish Department is reminding motorists to use caution when on the roads as the sun begins to set.

"There are more cars on the road when many Wildlife are active and the shadows allow them to blend in well to the surroundings," said Zen Mocarski, public information officer for the Game And Fish Region 3 office in Kingman. "This fact means there is an increased chance for collisions with wildlife."

Mocarski explained that vehicle collisions are the number-one killer of Wildlife in the nation, accounting for the death of more than one million vertebrate animals each day. He said many of these collisions are with smaller animals such as rabbits and squirrels, but there's always the potential for larger animals to be along roadsides which can create the possibility of a dangerous collision.

"Accidents with larger animals can be dangerous for anyone in the car," Mocarski stated. "There are some simple things people can do to reduce the possibility of such a collision."

He said drivers need to be focused not only on what lies immediately on the road, but to look for movement along the sides as well. In addition, having your lights on even when there is enough light to see can help because eyes will often reflect eyeshine. 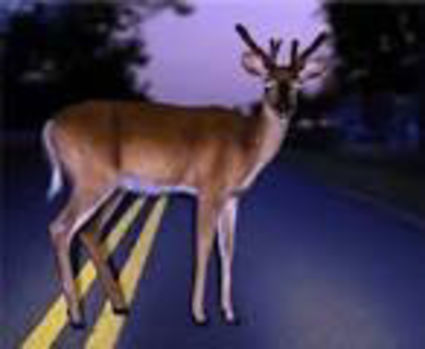 "Trust your instincts," Mocarski said. "If you thought you saw something move near the road, slow down. And, if you happen to see a deer or elk, do not immediately speed back up because where there is one, there are often others.

"Not all of the collisions are avoidable, but many can be prevented by remaining alert. During the summer most people are on the roads when the sun is shining, but this is the time of year when animals can be more difficult to see."

Mocarski added that any distractions inside the car, such as talking on a cell phone, make it more difficult to react quickly to a potentially dangerous situation.

"Stay focused on what lies ahead," he explained. "You may not only be preventing injuries to Wildlife, but also to yourself and anyone else in the car."