Icy Cold Was The Summer – Chapter One, Part One Of AZBW Serial

A Letter from London

A Novel By Carol L. Allen

Icy Cold Was The Summer I dedicate to my husband Jim who traveled with me during the summer of 1995, who shares my love of the United Kingdom and her people and who has patiently encouraged me with my writing.

Chapters Two, Three and Four--"Travel Log Trilogy"-- I dedicate to my own personal trilogy, my three daughters: Lisa, Christi and Chelle.

I had no idea, when I began my travel log of our summer in the United Kingdom, how much of the beauty we experienced would be tainted by haunting memories that have become as vivid as the pleasures. I share parts of it with you now. Travel with me through some of the glories of Scotland, the Irelands, North Wales, and England--and through some of my darkest passages. cla

Chapter One: A Letter from London

Chapter Two: At Tain: My Tour of Terror

Chapter Four: The Dolmen at Cable Bay: A Tomb Revisited

Chapter Five: At the Scene of the Crime

Chapter Six: A Flight to Murder

I had no idea, when I began my travel log of our summer in the United Kingdom, how much of the beauty we experienced would be tainted by haunting memories that have become as vivid as the pleasures. I share parts of it with you now. Travel with me through some of the glories of Scotland, the Irelands, North Wales, and England--and through some of my darkest passages.

Although the following settings will be recognizable to many and are based on our real travels, the characters are fictional, and any resemblance to persons living or dead is purely coincidental. cla

Just before Jim and I left Phoenix, Arizona, for our month-long trip to the United Kingdom, I received a letter from some old Canadian friends--the Cramptons.

The Cramptons were a young, childless couple we had known in Calgary before they were moved by a communications system to London, England. They had been there for several years, apparently quite successful in business, and now were the parents of three young children.

We intended to visit them in their townhouse on Trevor Place, near Hyde Park. I opened the letter, began to read and sank into my chair with horror at the contents:

We are anxious to see you and are so looking forward to your visiting us in London. It's been too many years since Calgary. And to Don and me, there is nothing more rewarding than spending time with our old friends from Canada. Those were good years, eh? We have lots of reminiscing to do together.

You have our address and phone number. We have your schedule. Please call us when you get into Euston Station, and we'll come get you--and do a little sightseeing on the way home.

On a sadder note, all of us are in the middle of a terrible nightmare here. We have been keeping Douglas, Lee and little Janey on a very tight leash since the kidnapping and murder of one of Jane's classmates in infant school. It has been horrible. All we parents are taking our children to school, picking them up afterwards, and watching them every minute. Going outside has been out of the question, and we have stopped letting them play in Hyde Park which they used to love to do after school in the afternoon. (If we go at all, we go as a family in the evening--just for a walk.) I am even afraid getting in and out of the car by our house. What if the murderer is hiding there in the shadowy bushes ready to grab one of our children? Since January we have been in fear throughout the neighborhood.

It all started with a series of rapes in and near Hyde Park. The rape victims were mostly young working girls on their way home. And, as horrifying as those rapes were, the most devastating tragedy occurred in March. One of Janey's little classmates did not come to infant school (kindergarten to you North Americans) one chilly morning. When little Kimberly Clarke's parents were called, they said that she had left home at the regular time and had walked the short distance to school, just as she did every morning. They had not seen her since. No need to tell you that panic struck us all. Pleas went out on radio and television for all of us to help in the search for Kimberly. Her description was broadcast, and the picture of a pretty, smiling little dark-haired girl was everywhere.

This next installment of Icy Cold Was The Summer will be in available in our next issue.

Icy Cold Was the Summer, a novel by Carol L. Allen. Published by Arizona Boating & Watersports, $13.00. An exciting travel mystery that starts in the British Isles and ends in San Diego. A must read for mystery fans of all ages. 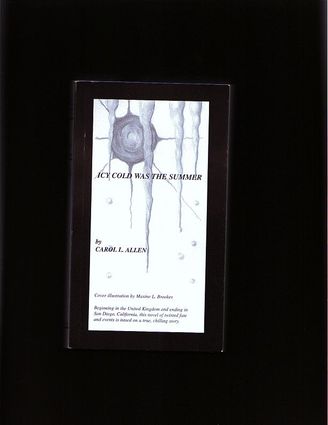 All rights reserved under International and Pan American Copyright Conventions. Published in the United States and Canada by Goals Publishing a Division of Life Goals Institute.

No part of this book may be printed or reproduced or utilized in any form or by an electronic or mechanical means, now known or hereafter invented, including photocopying and recording or in any information storage and retrieval systems without permission in writing from the publisher, except by a reviewer who may quote brief passages in a review.

Manufactured in the United States of America.