The Arizona Game and Fish Department disagrees with a recent appeal filed by environmental litigants to regulate lead ammunition on the Kaibab National Forest as the solution to lead poisoning in endangered California condors.

Three groups that want the U.S. Forest Service to place a mandatory ban on hunting with lead ammunition in northern Arizona lost their original lawsuit against the Kaibab National Forest filed in 2012.

Game and Fish intervened in the original lawsuit by the Sierra Club, Grand Canyon Wildlands Council and Center for Biological Diversity. The appeal challenges the Kaibab National Forest Land and Resource Management Plan that was recently finalized and its associated Environmental Impact Statement.

"Arizona Game and Fish has purposefully chosen wildlife conservation through partnerships, and education of its hunting constituents, not regulations," says Assistant Director of Wildlife Management Jim deVos. "The appellants falsely argue that California's mandatory ban is the answer, but we've had tremendous success with a voluntary lead-reduction approach that consistently garners 80 to 90 percent volunteer participation from hunters in the condor's core range."

California banned lead ammunition in condor range in 2008, but a recent study by the University of California/Davis concluded that condor lead poisoning has not been significantly reduced in that condor population.

"Lasting change takes time and partnerships, but results in lasting cooperation. It is naïve to think a regulation or lawsuit will fix the problem of ingested lead in condors," said deVos. "Even with a complete ban on the use of lead bullets in the condors' California range, birds continue to die from ingesting lead, demonstrating the ineffectiveness of a mandatory ban of lead ammunition in condor range."

Arizona Game and Fish began its voluntary, hunter-supported non-lead program in 2003 to reduce the amount of lead available to condors. Before the department's program began, estimates showed that less than four percent of successful Kaibab deer hunters used non-lead ammunition.

For the past two years, 88 percent of the state's hunters in condor range have taken voluntary lead-reduction measures even despite a nationwide shortage in non-lead ammunition in 2013.

In fact, this year's annual trapping and testing of condors from the Arizona-Utah population revealed a substantial decrease in the percentage of birds with toxic blood-lead levels, the lowest in nearly a decade.

Condors are now frequently using lands in southern Utah for foraging, especially during the fall hunting season. With expansion of the condor's range, conservation management must adapt along with the birds. The Utah Division of Wildlife recognizes the role it plays in the conservation of the species and began a more aggressive voluntary non-lead program in 2011. 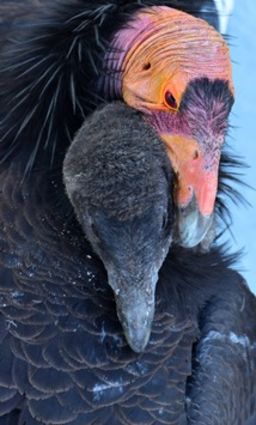 One of the testimonies on the effectiveness of the Arizona-Utah voluntary programs is the fact that condors have had successful reproduction in Arizona and the first nesting attempt this year in Utah.

Currently 75 condors fly free in the Arizona-Utah population, a tremendous increase given that no condors existed in the state prior to reintroduction in 1996.

For more information on condors and lead, visit http://www.azgfd.gov/condor.