Arizona Hunters Are Doing Their Part

Despite a nationwide shortage in non-lead ammunition, Arizona's hunters continued to demonstrate their support for the Arizona Game and Fish Department's voluntary lead reduction program in 2013 by using non-lead ammunition or removing gut piles from the field to benefit Endangered California Condors.

Surveys show that 88 percent of hunters took one of the two measures to reduce the amount of available spent lead ammunition in the condor's core range. The level of participation was equal to the previous year.

However, in addition, more than double the number of hunters (31) buried or covered their gut pile to prevent condors from scavenging on them, a measure that is not included in the total statistics.

"Maintaining a high-level of voluntary participation in the department's non-lead program at a time when non-lead ammunition was very hard to find, as well as setting a record for the number of gut piles removed or buried, demonstrates a clear willingness by hunters to help conserve condors," said Allen Zufelt, the condor program biologist for the Arizona Game and Fish Department. "Arizona has a proven and successful program that now serves as a model to Utah as they work to implement similar lead-reduction measures in the condor's newly expanded range."

Of the 88 percent of successful big game hunters who voluntarily took lead reduction efforts, 60 percent used non-lead ammunition during the fall hunts in the condor's core range. Another 28 percent removed gut piles from the field.

Hunters who removed lead-fragmented gut piles from the field were eligible to win raffle prizes. Some of the winners of this year's raffle include -

Lead poisoning has been identified as the leading cause of death in condors and the main obstacle to a self-sustaining population in Arizona. A number of scientific studies collectively provide evidence that spent ammunition is the primary source of lead exposure in condors.

The department started offering free non-lead ammunition in 2005 to hunters drawn for hunts in the condor's core range, which includes Game Management Units 12 A/B and 13A.

The free non-lead ammunition program is supported in part by the Heritage Fund, a voter-passed initiative started in 1990 to further conservation efforts in the state, including protecting endangered species, educating children about Wildlife, helping urban residents to better coexist with Wildlife, and creating new opportunities for outdoor recreation. Funding comes from Arizona Lottery ticket sales.

Participation in the non-lead effort has jumped more than 40 percent from its initial levels in 2005.

Arizona firmly believes a voluntary lead reduction program not only works better (than a mandated measure), but results in longer-lasting change while upholding the original agreements made with local communities to gain their support for the condor's reintroduction. Those agreements or assurances were made possible through the 10(j) option of the Endangered Species Act.

The condor program likely would not have been implemented without the federal government's assurance to local stakeholders that they would not seek changes to current hunting regulations, including a lead ammunition ban, due to the condor's reintroduction.

Mandated measures violate the assurances given and put the program at risk.

The condor is the largest flying land bird in North America. The birds can weigh up to 26 pounds and have a wingspan of up to 9 1/2 feet. 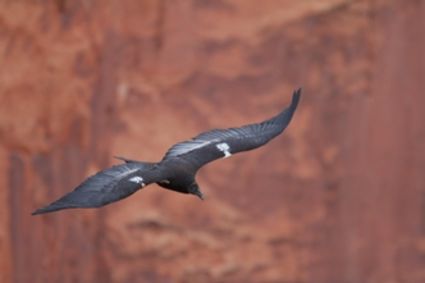 Condors were first reintroduced in Arizona in 1996, and they now number more than 70 in the state. Visitors at the Grand Canyon and Vermilion Cliffs may be able to observe the birds, especially during the spring and summer.

For more information on condors and lead, visit http://www.azgfd.gov/condor.