BoatUS Speaks Up For Boat Owners At EPA Ethanol Hearings

The blending of ethanol into the nation's gasoline supply was the topic of a hearing held today by the epa to discuss the 2014 Standards for the Renewable Fuel Standard (RFS) Program.

Last month, epa released the 2014 proposed standards that reduced the amount of corn ethanol mandated under the RFS for the first time since the law was implemented. This was a small but tide-changing victory for boat owners whose vessels cannot operate with ethanol above a 10 percent blend level without serious harm or safety concerns.

BoatUS Government Affairs Program Manager Nicole Payla Wood, along with a coalition of representatives from environmental groups, fuel and manufacturing associations as well as food, restaurant, poultry and meat producers testified at today's hearing to lower the Renewable Fuel Standard.

"We believe in a national renewable fuels policy, but one that is both safe for boaters and sound for the environment," said Wood, "However, until the current ethanol mandate is removed, there is little room for investment in other renewable fuels that may not have the current negative impact of corn-based ethanol."

Wood explained that the real success would come if Congress changes the law to recognize today's decreasing fuel usage in the United States.

In her testimony, Wood advised the epa, "We want to commend the epa for taking a giant step towards addressing the current-day realities of the Renewable Fuel Standard with the drafting of the 2014 proposed renewable volumetric obligations.

"We applaud their pivotal recognition of the shrinking demand for fuel and hope this sends a signal to Congress of the dangers that an impending blend wall presents to the average consumer. The epa is trying to do its part for the consumer in addressing these market changes, and now is the time for Congress to do so as well."

Wood added: "As the Renewable Fuel Standard policy pushes higher blends of ethanol gasoline into the market, there is an increased potential for misfueling and engine failure that needs to be made clear. Not all Americans can afford to drive tow vehicles made after 2001, and for boaters. these higher blends are poison to our marine engines.

"There is a critical safety and soundness issue related to the use of higher blends of ethanol in marine engines that cannot be denied. More than half of Boat Owners Association of The United States members fuel their boats at roadside gas stations. With 11 states now approved to sell E15 - a fuel that no marine engine is warranteed to run on - the opportunity for misfueling is growing.

"And. what may result in a roadside breakdown for a car, can quickly lead to a search-and-rescue mission or search-and-recovery [mission] in a boat.

"We think it's also important to point out that epa's role in the Renewable Fuel Standard is to implement the policy, not reform the law. Although there are implicit waiver authorities written into the law, the epa shouldn't have to use that authority to modify policy to meet the realities of the current marketplace every year.

"It is the responsibility of the epa and Congress. however, to ensure that the fuel they approve for our consumers is a safe and reliable fuel for our engines, all engines. It is our hope that Congress will now accept the baton, and continue their work on a permanent fix for the Renewable Fuel Standard." 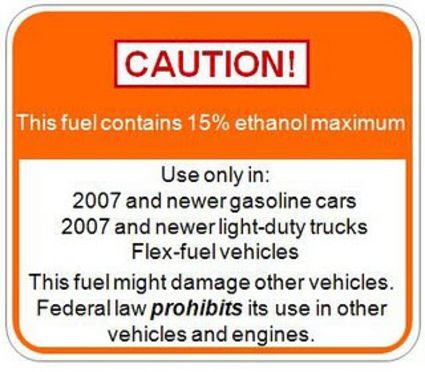 VITAL STATISICS -- This little label on a gas pump could be all that separates boaters from dangerously misfueling their boat.

For more information, a two-page 2013 E15 and the Renewable Fuel Standard Issue Brief by BoatUS Government Affairs is available at: http://www.BoatUS.com/Assets/www.boatus.com/gov/pdf/Issue Brief - Ethanol.pdf

Boat Owners Association of The United States (BoatUS) is the nation's leading advocate for recreational boaters providing its over half-million members with government representation, services such as 24-hour on water boat towing as well as roadside assistance for boat trailers and tow vehicles, feature-packed boat insurance programs, money-saving benefits that include marina and West Marine shopping discounts, and vital information that improves recreational BOATING.

Go to BoatUS.com for more information.