Cub Comes Aboard At Lake Powell 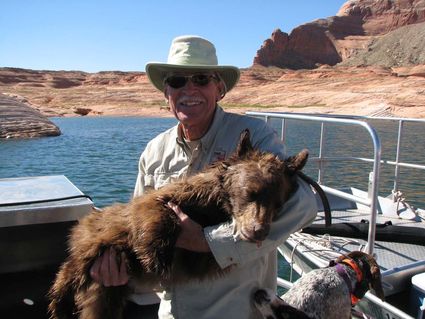 VISIT FROM A BEAR -- After visiting Lake Powell houseboats last month, this bear was tranquilized. Here, Wayne Gustaveson holds the cub, which, after a sound sleep and later, a dramatic rescue from the lake, was finally returned to more appropriate bear country in Utah

On Friday, Sept. 27, 2013 a bear cub showed up on the shoreline of Lake Powell. Visitors in Face Canyon were certainly surprised to see the little guy and even more amazed that he seemed right at home walking up the ramps of the houseboats parked there.

He was looking for food as he was obviously very hungry after a long walk from wherever he came from. Food was offered. The bear seemed to like fish and table scraps.

But children, dogs and bears are not compatible. The bear visitation was correctly reported to the National Park Service.

‘There’s A Bear On My Boat’

On Sept. 28, NPS and Utah Parks and Recreation officers went to Face Canyon, found the bear and escorted it away for the lakeshore, hoping it would return home.

Unfortunately, the bear really liked the food provided by the houseboaters and returned to Face Canyon the next day.

Utah Division of Wildlife Resources officers were summoned from Cedar City, Utah, where bears are a bit more common than at Lake Powell. Two tracking dogs and three Wildlife experts arrived at the Face Canyon site to find no houseboats parked on the beach.

The dogs were let loose and the hunt was on when a visitor came over the hill and stated. "Can you help me? There's a bear on my boat." (When his family returned from a hike, they found their boat occupied by a bear cub.)

The dogs were leashed, the tranquilizer gun loaded and the bear was injected with anesthetic. Just before passing out, the bear decided to make one more rush to freedom.

He plunged off the boat into Lake Powell, swam a few yards, and then went limp. Jason Nicholes, UDWR Wildlife biologist, knew the bear was now in serious trouble.

He stripped off his shirt, tossed his cell phone on the ground and jumped in the lake. He grabbed the bear after an Olympic free-style swim and held the bear out of the water until the boat could come pick them both up.

The bear was then given an antidote and allowed to regain consciousness as it was transported back to Wahweap Marina and then on to Cedar City, Utah.

The cub recovered nicely and seemed to have little adverse reaction following the abrupt end to his Lake Powell vacation.

The cub was collared so that he could be tracked and tended to as needed. He was released unharmed in the mountains of southern Utah in an area with lots of acorns and other food that bears in that area enjoy.

Hopefully, he will live a sedate and peaceful life in his new home.