Once considered the most endangered mammal on the planet, the black-footed ferret continues its climb toward recovery in Arizona's Aubrey Valley. As part of this recovery effort, the Arizona Game and Fish Department is seeking volunteers to assist with two spring spotlighting events to document the population of this elusive, nocturnal, and endangered carnivore.

Witness the process of how researchers learn how to understand the black-footed ferret's population, longevity, and movement throughout the range.

The Black-footed Ferret Recovery Project personnel will be conducting two shorter spotlighting efforts instead of five consecutive nights, as in the past. The spotlighting periods will be from March 28-30 and from April 25-27 at the black-footed ferret recovery area in Aubrey Valley, just west of Seligman. Sign up for just one evening or several.

Volunteers must be able to stay attentive from sunset to sunrise and be willing to learn how to use a Global Positioning System (GPS). A parent or guardian must accompany volunteers under the age of 18.

Twice Thought To Be Extinct

Twice thought to be extinct, a small population of black-footed ferrets was discovered in 1981. Only 18 were left when captive breeding efforts began in 1985. In 1996, Arizona's Aubrey Valley was selected as a re-introduction site, where the population has become large enough over the past decade to be self-sustaining.

All the ferrets in the wild today are the offspring of just seven males and 11 females. A record 123 individual ferrets were documented in 2012, confirming that the re-introduction of these specialist carnivores in Arizona has been a tremendous success.

The program is funded through the state's Heritage Fund and federal match dollars. Volunteers are vital to the continued success of the program because the department does not have the personnel to fully staff these events.

If You Wish To Volunteer 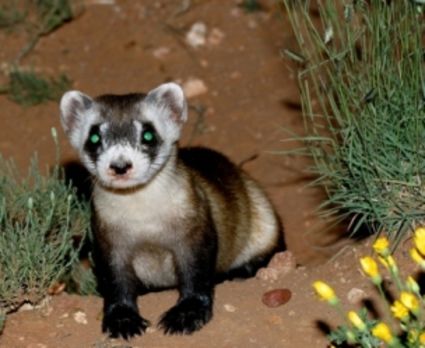 For more information about volunteering, e-mail azferret@azgfd.gov by March 22 for the first spotlighting effort, and by April 19 for the second. On the subject line of the e-mail, write "Spring Spotlighting" with "March," "April," or "Both." Indicate which night(s) the volunteer is available, first and last name, contact number, and whether they will be accompanied by anyone else.

Please note whether the volunteer can bring GPS, clipboard, headlamp, pen, binoculars, walkie-talkies, 4x4 vehicle (include passenger capacity), compass, and a spotlight that is rechargeable or can be plugged into the vehicle's cigarette lighter. Temperatures will be cool, so dress appropriately.