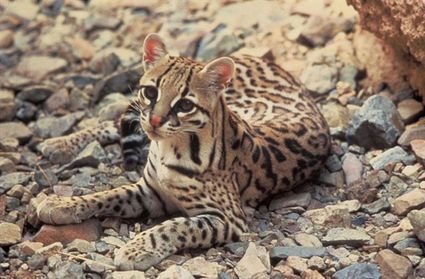 SAME CAT? -- New trail camera photos of an ocelot in the Huachuca Mountains are now being analyzed by the Arizona Game and Fish Department to determine if it is the same one sighted there twice in 2011. The photos  taken late April 26 and early April 27  were provided to the department by a third party. If this is the same ocelot, the cat appears then not only to have survived the 2011 Monument Fire but also has stayed in the Huachucas.

New trail camera photos of an ocelot in the Huachuca Mountains are now being analyzed by the Arizona Game and Fish Department to determine if it is the same one sighted there twice in 2011.

The photos — taken late April 26 and early April 27 — were provided to the department by a third party who wishes not to be identified. The ocelot’s spotting pattern is being compared to that of an ocelot photographed by Game And Fish officers in February 2011 and by a hunter’s trail camera in May 2011. The spotting patterns in the 2011 photos, both taken in the Huachucas, matched.

“If photo analysis concludes it is the same ocelot, it shows that the cat not only survived the Monument Fire, but also remains in the Huachucas,” said Regional Supervisor Raul Vega of Game And Fish in Tucson.

Ocelots are small to medium-sized spotted cats with a long tail. These cats have been listed as endangered since 1982 under the federal Endangered Species Act. Since being listed, ocelots have only rarely been seen in Arizona. Only one other ocelot, an animal run over near Globe in April 2010, has been confirmed in Arizona since the mid-1960s.

The department has been provided with two other trail camera photos of an ocelot reportedly taken in Arizona, from February 2012 and November 2009. In both cases the location of the photos could not be determined, although the February 2012 photo was of the Huachucas ocelot based on the spotting pattern.

Ocelots Are Protected By ESA

Ocelots tend to be smaller in size in the more northerly portions of their habitat range than those individuals in the central or southern habitat areas. The upper body coloring is highly variable, ranging from grayish to cinnamon or tawny to reddish brown. Dark markings form chainlike streaks down the sides of the ocelot’s body. They have a fairly long tail, as long as the body, and short rounded ears.

The present range for ocelots is in the eastern and western lowlands of Mexico, from southern Mexico through Central America and in the lowland areas of Colombia, Ecuador, Peru and Brazil. On the fringes of their range, they occupy a very limited region in both the United States (a remnant population exists in southern Texas) and Argentina.

Other animals such as bobcats, young mountain lions and servals — an African cat popular in the pet trade — are sometimes misidentified as ocelots, which is why verification is so very important.

Ocelots are protected by the Endangered Species Act and should be left alone. If anyone encounters a cat believed to be an ocelot, the Game And Fish Department requests that photos, along with observation information, be reported immediately to the department. A phone number for reporting is 1-800-352-0700.