Be ‘Bear Aware’ As Weather Warms Up 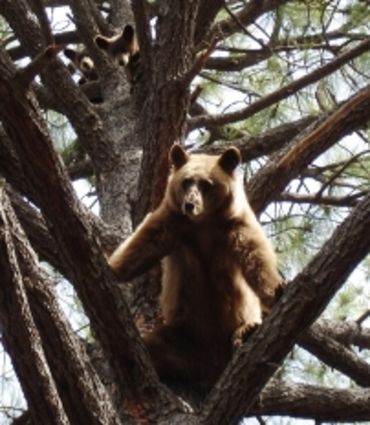 As spring temperatures continue to warm in our state, the Arizona Game and Fish Department advises people who camp, recreate or live in bear habitat to be “bear aware,” as bears are coming out of their winter dens and becoming more active.

Consecutive dry winters and intermittent seasonal rains, coupled with the impacts from last year’s large fires, suggest there may be more cases of bears visiting residential areas this year in some parts of the state.

Bears in search of food are often attracted to homes and into proximity with people. This close contact puts both humans and bears at risk. Most conflicts are the result of people unintentionally feeding bears, most often by allowing them access to household garbage, bird feeders, garden areas or trees bearing fruit.

Since garbage stored outside is the biggest attractant, storing garbage in a secure garage or shed until the morning of collection will virtually eliminate the chances of a bear visit. If a bear does not find a food source, it will move on.

Fences, lighting and dogs have not been found to be effective, long-term deterrents when foods are available. Bears are good climbers, so to reduce a bear’s ability to get over a fence, it should be at least six feet tall and constructed of non-climbable material.

Recognizing the potential risk to both humans and bears, Game and Fish spends considerable time and money each year relocating bears. Unfortunately, this effort does little for the bears or homeowners. Some bears must be destroyed because they are considered too dangerous, have lost their fear of humans, or continue to get into conflicts with people.

Following removal or relocation, the homeowner might experience more problems from a different bear if the identified attractant is not eliminated. Relocating a bear is also traumatic for the animal and does not guarantee it will live. Some are killed by larger, older bears that have established territory in an area.

If a bear is in your yard or neighborhood and refuses to leave, immediately contact your closest Game and Fish office during business hours, or call 1-800-352-0700 evenings, weekends, and holidays. Depending on what the bear is doing, department personnel may respond if it remains in the area.

If you see a bear in the distance, go in a different direction to avoid it. Bears rarely approach people. If a bear does approach you, discourage it by —

• Giving the bear a chance to leave the area.

• Staying calm if the bear does not leave, continuing to face it, and slowly backing away.

Black bears are the only species of bear in Arizona. Although they are called black bears, their fur color can vary widely and include brown, cinnamon and blond bears. These are the smallest and most common type of bear in North America.