We Learned Some Early Winter Lessons 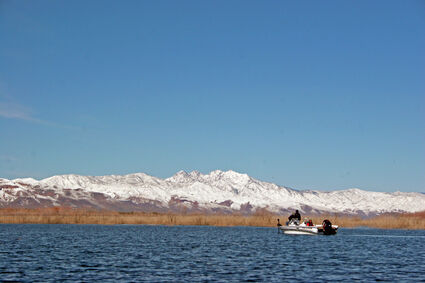 It was cold, but the fishing was hot.

We went out with Dave Prothe under the worst conditions. Roosevelt was the lowest I've ever seen it, and it was cold out. The water was dirty and there was a tournament going on. Prothe, however, seemed cheerful and optimistic. And with good reason, too -- the first fish he caught (before the sun was even over the horizon) was a largemouth that weighed at least four and a half pounds.

This Is The Time

"This is the time of year that the water starts cooling down and the bass start chasing Shad out of the channels," Dave says. "That's why I look for flats and shallow-water areas where the channel cuts in real close." Prothe says that Salome and the area around Windy Hill are usually good places in these conditions, but since the water is so low right now he's starting on the rocky flats in the Tonto end. He knows how the channel runs down here, and he starts on a really dull-looking rocky bank right away.

The bank looks a lot less dull about five minutes later as Prothe reels in a huge bass. The fish seem to be in the small cuts in the rocky banks, and they are so shallow that you almost have to cast your bait on shore and drag it into the water to get them. "The bass this time of year are chasing Shad, so they can be anywhere on the bank," he explains. "The hardest part is passing through them. You may go down a bank for a long time and not get bit, but then suddenly you'll catch a bunch of them real quick." He says you just have to locate some good banks and go over and over them for the better part of the day.

Matching The Bait To The Fish

Dave says that he thinks you could probably go down this bank with a 1/4-ounce Rat-L-Trap and catch a bunch of small fish right away, but he's throwing a spinnerbait right now. The spinnerbait is a small one–1/4 ounce, with a blue and white skirt and very small gold blades. The Shad we can see are small, so Prothe is matching the bait to the fish. A lot of the fish are just slapping at the lure, but Prothe has a trailer hook on so he still manages to get most of them in the boat. His trailer hook has a streamer on it that he tied himself. Raised in Colorado, Prothe used to fly fish for trout most of the time, and he hasn't let his fly-tying skills go to waste now that he's a bass fisherman.

Prothe says he used to use double-tail plastic trailers, but then he saw some trailer hooks for buzzbaits that were big treble hooks with streamers. He figured it would work for spinnerbaits with a regular hook so he tied some up and has been using them ever since. They don't add any weight, he can make them in any colors he wants, and they look and work great.

He puts a little Mylar in them for flash, and uses a small piece of rubber tubing to keep the trailer hook on the spinnerbait. The majority of the fish he is catching have grabbed the trailer hook.After going down the bank one time with the 1/4-ounce spinnerbait, Prothe picks up another rod with an identical lure, but slightly heavier.

He goes back over the same bank with that lure, but it is clear that the lighter lure is getting more strikes. "Sometimes changing your bait will work," he explains, "but most of the time you just have to change your retrieve until you find out what works." He will fish the same bank with a variety of retrieval speeds if he feels confident that fish are there. Once he catches a fish, he just keeps doing whatever it was that worked until it doesn't produce any more fish.

This bite is tough. Nobody else in the boat has caught anything, and we've tried a variety of crankbaits and spinnerbaits. I'm not one to believe in "magic" baits usually, but I was starting to eye Prothe's spinnerbait covetously. Later on we ran into Homer Helmuth and he said that the guy in the back of his boat wasn't getting bit, either, so I didn't feel quite so bad. Still, fishing behind Prothe is like fishing behind a vacuum cleaner. After about nine o'clock in the morning, Dave declares the spinnerbait bite to be officially dead. We have left the Tonto by now and have fished around Salome on both sides with little to show for it.

By now Dave has tied on a #5 deep-diving Rapala Fat Rap in chrome and black, and he's casting to steeper banks. On the steep stuff with big rocks, like in the entrance to Salome, he is pitching the lure into the nooks and crannies trying to lure the bass out of their hideouts. "Last week I found water coming out of the rocks in here," he tells us, "but I don't know if it is springs or groundwater." Sure enough, pretty soon we hear the trickle of running water and then we can see the water seeping out of the rocks and running into the lake. "I caught a great big smallmouth right here last week," Prothe grins.

After deciding that the shallow bite has gone dormant, Prothe fires up the big motor and moves out to some points and humps near the old marina. The water here is very shallow, but it drops off quickly. Dave starts fishing the edges of the drop-off with jigs and crankbaits and picks up a few more fish, then we move on down to the Tonto where we started out. Now, however, he is staying out over the channel. "Once the bass stop chasing Shad up shallow, they usually move back to the channel," Dave explains. "I like to try a few different things to see if I can get them to bite out here." The next fish in the boat is an "over", the third one of the day. It just squeaks over the 16-inch line on Prothe's board.

The fish are taking jigs now. We're fishing 5/8-ounce football head jigs with pumpkin skirts and twin-tails, and the fish seem to like them best when they're swimming. One way to swim a jig is to cast it out, let the line free-spool until the jig hits bottom, then engage the reel. Swim the bait back slowly so it is just barely ticking the tops of the rocks. Some people like to swim the lure by reeling it slowly in, but others like to pull the lure over the bottom by moving the rod, then reel in the slack and pull again. It can be easier to detect bites when you're pulling on the rod than it is when you are reeling.

Sometimes a bass will pick up the jig and swim toward you. If you are not paying attention, these are the ones you will miss. Watch your line and if it goes slack when it shouldn't, set the hook hard and get that bad boy in the boat. Prothe catches more than his fair share of fish on the jig, and he's in a good mood. It isn't even noon yet and he's already had three "overs" in the boat, one of them a real toad.

"The great thing about this bite is that if it doesn't freeze real hard, it will keep going until March or so," Dave tells us. "A big front will slow it down, but it usually only takes three or four days for the fish to settle down afterwards." Prothe revealed that he fishes spinnerbaits and crankbaits up shallow all winter long. As long as the water temperatures are between 55 and 65 degrees, he says, he feels confident that he can catch fish on a blade or a plug. He throws them from dawn until mid-morning, then again later in the afternoon when the bass return to the shallows to feed. In between, he hits the channels with jigs and deep-diving crankbaits. Isolated rockpiles on the edges of the channels or on big flats are hot spots, he says, especially if the rockpile is on a flat that is otherwise smooth and muddy.

It Can Work For You Too

"The thing to remember about the fall is that until the bass really start to relate to structure, they can be just about anywhere," Prothe emphasizes. "You just have to keep fishing until you find them, then go over the area several times. Usually that will get you a couple more." Choose a lure that resembles the primary baitfish in color and/or size, and be persistent. It pays off for Prothe, and it can work for you, too. You've got until spring to prove it to yourself!