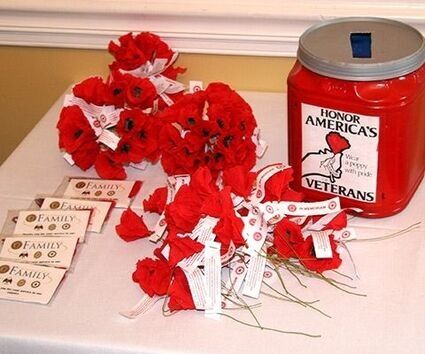 Before Memorial Day in 1922, VFW conducted our first poppy distribution, becoming the first veterans' organization to organize a nationwide distribution. The poppy soon was adopted as the official memorial flower of the Veterans of Foreign Wars of the United States, as it remains today.

During our 1923 encampment, we decided that VFW "Buddy"® Poppies would be assembled by disabled and needy veterans who would be paid for their work to provide them with financial assistance. The next year, disabled veterans at the Buddy Poppy factory in Pittsburgh assembled VFW Buddy Poppies. The designation "Buddy Poppy" was adopted at that time.

In February 1924, we registered the name "Buddy Poppy" with the U.S. Patent Office. A certificate was issued on May 20, 1924, granting our organization all trademark rights in the name of Buddy under the classification of artificial flowers. We've made that trademark a guarantee that all poppies bearing that name and the VFW label are genuine products of the work of disabled and needy veterans. No other organization, firm or individual can legally use the name Buddy Poppy.

Today, our Buddy Poppies are still assembled by disabled and needy veterans in VA Hospitals. The VFW Buddy Poppy program provides compensation to the veterans who assemble the poppies, provides financial assistance in maintaining state and national veterans' rehabilitation and service programs and partially supports the VFW National Home For Children. Show your support today. Host a Buddy Poppy drive in your town, or have your local government issue a special proclamation.

After World War I, the poppy flourished in Europe. Scientists attributed the growth to soils in France and Belgium becoming enriched with lime from the rubble left by the war. From the dirt and mud grew a beautiful red poppy. The red poppy came to symbolize the blood shed during battle following the publication of the wartime poem "In Flanders Fields." The poem was written by Lieutenant Colonel John McCrae, M.D. while serving on the front lines.

Led by the American Legion Auxiliary, each year members of The American Legion Family distribute poppies with a request that the person receiving the flower make a donation to support the future of veterans, active-duty military personnel and their families with medical and financial needs.

Poppy Day is celebrated in countries around the world. The American Legion brought National Poppy Day® to the United States by asking Congress to designate the Friday before Memorial Day, as National Poppy Day. On May 28, Legion members urge the public to wear a red poppy to honor the fallen and support the living who have worn our nation's uniform.

Editor's Note: Canadians feature the poppy on November 11, which they designate as Remembrance Day. In the United States, many wear the poppy on both Veterans Day, November 11, and on National Poppy Day on the Friday before Memorial Day.

In Flanders fields the poppies blow,

That mark our place; and in the sky,

We are the Dead. Short days ago,

Take up our quarrel with the foe;

To you from failing hands we throw,

If ye break faith with us who die,

We shall not sleep, though poppies grow,

•What does the poem In Flanders Fields mean?

"In Flanders Fields" is a poem written by Lieutenant Colonel John McCrae, a Canadian doctor and teacher, during the first World War. The poem describes poppies blooming between gravestones. The poppies represent the fallen soldiers, who died in the days before. They felt the sun, but now they lie beneath the ground.

• Where are Flanders Fields located? 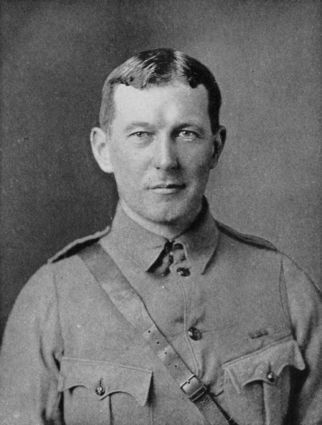 Our Thanks To Scottsdale United Methodist Church

You will notice some veterans' poppies in the narthex today brought in by Scottsdale United Methodist Church (UMC) member Carol Allen. There is no charge to take a poppy (perhaps to wear on Veterans Day, Nov. 11) although donations are always welcome. This display is from the Scottsdale Veterans of Foreign Wars (VFW) Post 3513 Auxiliary. There is also information in the displayed papers re: how the donations are used to help the veterans. If you have questions, please email editor@azbw.com. Thank you to Scottsdale UMC for the opportunity to present these poppies to their members.