This Is Home For Many Homeless Vets 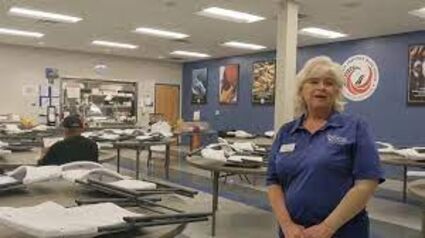 MANA house is for Marine, Army, Navy, and Air Force vets who need a helping hand.

Far too many veterans are homeless. At MANA House, we offer a safe place to start over for veterans experiencing homelessness in Phoenix. Once they reach stability and move on to permanent housing, we do our best to send them off equipped with a Welcome Home Kit. Learn about these kits, the important role they play in veteran housing success, and how you can help. https://www.catholiccharitiesaz.org/.../welcoming./ https://manahouseaz.org/about-us

Formerly known as Madison Street Veterans Association, the MANA (Marines, Army, Navy, Airforce) House is a peer-support organization of homeless and formerly homeless veterans. We help support veterans rebuilding their lives by providing support from our staff and partners.

Alone, the challenge of homelessness is daunting. Together, no one is alone and we can overcome any obstacle. Together we can bring an end to veteran homelessness.

MANA House is a peer-run organization of homeless and formerly homeless veterans offering personal, individualized basic resources, community and advocacy for all veterans.

We listen, accept and understand. We create success by practicing these core values:

May 2008 – Fourteen veterans begin to manage their own space in the Mens Outreach Shelter (MOS) on Madison Street in downtown Phoenix.

Summer 2008 – Madison Street Veterans Association (MSVA) is created as a peer group and serves as an inspiration to other groups in the shelter who organize around their own defining bonds.

Fall 2008 – The group meetings at MOS became too large, so they moved to Lodestar Day Resource Center. LRDC agrees to become the fiscal agent for MSVA.

February 2009 – MSVA volunteers for a veterans stand down event assisting with traffic control, cleaning the area and tearing down after the event.

May 1, 2010 – MSVA opens MANA House, a transitional living facility at the YWCA building in Phoenix, which houses 49 homeless veterans.

June 2010 – Representatives go to Washington D.C. to the National Coalition for Homeless Veterans to share their own successful experiences, look for grant money and to do program research.

October 2010 - MANA House is approved for grant and per diem funding by the Veterans Administration. Grant funds used to remodel the kitchen and replace the flooring.

December 15, 2011 - Terry Araman, Director of the MSVA, is recognized as a "Champion of Change" and invited to the White House to speak about ending veteran homelessness.

August 2018 – The first residents move into the Catholic Charities MANA House new, expanded facility on Holly St. near the I-17 and McDowell. The new facility has space for up to 76 veterans, nearly double the number at the previous facility. It also offers an industrial kitchen and dining room, large enough for all residents to enjoy meals together and build comraderie, plus a computer room, a day room with books, games and a pool table, and laundry facilities.

Valley of the Sun United Way