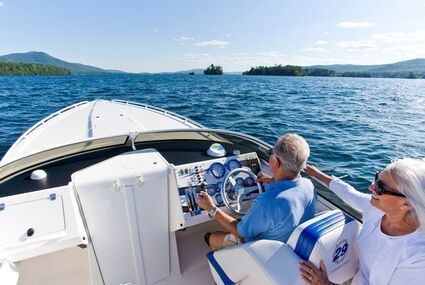 The focus is on boating-centric inland lakes with distinction.

There are 123,439 freshwater lakes – those water bodies generally larger than 20 acres – in the continental United States. Which ones may be best for recreational boating?

While its water level was 30 percent of capacity last year, America's second largest man-made lake with 96 major canyons and 2,000 miles of shoreline remains in the top realm of houseboating destinations. It's also popular with wakesports enthusiasts, anglers and kayakers who paddle the slot canyons. Dozens of fish species are stocked, and if a houseboat is too big for you, runabouts, ski boats, pontoons and PWCs are available for rent. This is a true desert BOATING experience.

More than 6,000 feet above sea level in the Sierras, this alpine lake is renowned for its clear waters offering 75 feet of visibility - making hanging out at anchor a new experience. There are 13 marinas, 2 clubs, 17 ramps and distinct north and south regions, the latter being where most of the action is and recovering from the Caldor fire. Trophy mackinaw, cutthroats and kokanee salmon lurk its turquoise-hued waters.

The nearly 40-mile inland waterway with 11 marinas stretches across Michigan's upper "mitten tip" from Lake Michigan to Lake Huron. The waterway's two largest bodies, Mullett and Burt lakes, are located in the middle of a rural tourist region that triples in population in the summer - yet boat traffic remains modest. Paddlers are abundant, as are the sportfish - walleye, pike, rainbows, smallmouth, steelhead and perch. Don't forget your rod: The 17,000-plus acre Mullett Lake is the home of the current state record for a 193-pound lake sturgeon.

The largest non-man-made lake west of the Mississippi, Flathead's stunning mountain views abound. The lake's clear waters are known for trout (lake, rainbow and bull) and whitefish. This is the place to camp, picnic and explore islands with old-growth ponderosa pine forests, wild horses, mule deer and bighorn sheep. Many out-of-town boaters plan their trips to coincide with the famous Flathead cherry harvest (mid-July to early August). Nine marinas dot the lake's shoreline.

There are crystal clear lakes, and then there is Lake George. Its waters are rated for drinking and surrounded by towering forest-green Adirondack scenery where tucked-away bays, knee-deep sandy anchorages, towering cliffs and more than 170 islands await - some available to boat camping. Angling (land-locked salmon, trout, bass and crappie), watersports and paddling are popular. Traffic on the south end of the 32-mile long lake can be heavy on summer weekends, but a stop to the touristy village there is must.

This deep, man-made lake with emerald green waters is a hidden gem in the shadow of the Smoky Mountains' endless forest. But don't come looking for a crowd as there is a paucity of amenities - just four marinas and no dockside restaurants. What you will find are cold mountain waters that hold fish species typically found up north (walleye, steelhead), a winding watery playground with hidden cove hideaways, misty mountaintop islands (created by the 480-foot Fontana Dam) and stunning beauty.

The lake is the site of many local and national fishing tournaments as well as watersporting events and summer music concerts. Rental cottages and Airbnbs, most with their own boat ramps and docks, along with 14 marinas and numerous restaurants, make the lake popular across a diverse range of watercraft. If you're lucky, you'll see the annual return of Purple Martins to Bomb Island (June-August) when waves of birds fill the sky. On busy weekends, a quiet spot can be found out of the wake zone by heading east away from the dam, back in a quiet cove. 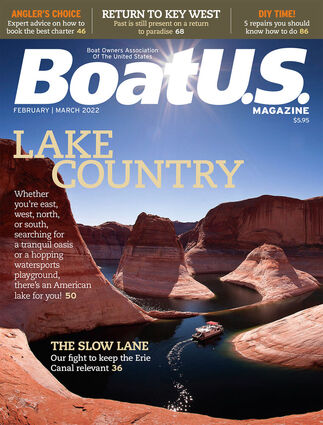 If you are looking for the centerpiece of a tourism destination, Grand Lake is it. Ranked among the top bass-fishing lakes in the U.S., with an incredible 18 marinas on a 1,300 mile shoreline, five state parks, bustling towns, restaurants and waterfront resorts lining the shore, Grand Lake caters to a wide variety of boaters. Anglers as well as families lounging and playing on large floating mats hang out in its quiet coves. Predictable winds make this lake a friend to sailors.

Just a mile or two wide and 50 miles long, Lake Chelan threads its way deep into the North Pacific Cascades. The incredibly deep lake, much of it boat access only, gets 300 days of sunshine each year and is surrounded by forest. State parks, more than a dozen remote boat campsites, an old copper mine village and a 312-foot waterfall are popular. The lake is for play - wakesports, skiing, windsurfing and paddlers. Sailors find consistent winds up on the north end. Salmon, trout and smallmouth await anglers.