Advice To Young Riders: Don't End Up In The Morgue! 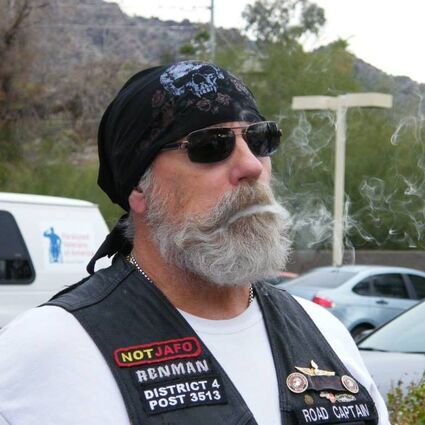 I love riding motorcycles and have been doing so for just short of 60 years. I've been able to do this because I try to ride as safely as possible even with some of the crazy drivers out there.

I do my TCLOCS checks at least monthly and before every long ride to ensure the bike is up to snuff. I carry tools and spare parts in order to try to fix anything that does break during a run. And, I work my "road plan" so as to stay out of bad situations.

Lately I have seen a lot of younger people riding those motorized scooters on the sidewalks and at times, going faster than the traffic around them - and they're on the sidewalks!

I don't have too much of an issue with this as long as the pedestrians are safe, but what about safety gear for the ride?. Many people think there is no helmet law in Arizona, but there is. If you are under 18 and riding a motorcycle, you must wear a helmet. Many of these scooter drivers are not only not wearing a helmet, but also they lack other basic safety equipment such as shoes or boots that cover the ankle, long trousers, and gloves.

If one of these young people were to go down (and it happens) their hands will be destroyed, skin will come off every body part that touches the pavement, their sandals or tennis shoes will fly off and their feet and ankle bones may suffer to the point they may not be able to walk ever again. And, without their helmets, they may be reduced to someone with severe brain injuries or even be killed. Not good options!

Safety gear when riding is essential to keep you and your passenger safe. I'd like to ask all parents to ensure and encourage their young people to wear appropriate safety gear when riding their scooters as it's better to be a little warm riding during the summer than spending your time in the hospital or worse -the funeral home.

Tom Cole was born on Chicago’s west side, graduated from high school in California, and is a retired USMC Master Sergeant (’69-’92). Cole served over twenty years in corporate America management, two years on the Kabul Embassy Security Forces in Afghanistan, has an Associate Degree in computer science, a Bachelor of Science, and an MBA. He has traveled around the world on ships and planes, and is a Golden Dragon, Shellback and Imperial Turtle. Cole is a Vietnam veteran, and was involved in an Iran rescue attempt and a Philippine coup attempt. Cole retired in 1992 after Desert Storm. We know him as a loyal husband, dad of five and grandpa of six. In his own words, Cole describes himself as "a great BSer with a crazy sense of humor.