Take An Off-Road Adventure In The Belmont Mountains 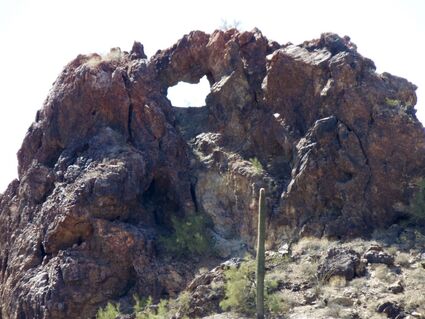 Keep your eyes peeled -- there are a lot of these little arches or holes in the rocks in the Belmont Mountains.

The Belmont Mountains are full of history. The Belmont Mine is now abandoned, but back in the 1920s up until the' 30s, it was a busy copper mine that also produced gold and silver. Now the big adit and mine opening have metal grates over them – the main one is over 500 feet deep, and a couple of people fell to their deaths in the abandoned mine, which led to the grates being installed.

There is lots to see around the Belmont Mountains, especially at the site of the old mine. You can drive up the mountain and go around the back and see the big mine entrance with the grate over it, and you can drive up the other side of the mountain and see the huge adit (adits are horizontal mine openings) that is grated off. There are a lot of old foundations and a small rock-walled and roofless building that everybody calls the Powder Room. Supposedly, this rock building is where they kept the explosives for the mining operation.

We have driven up to the Belmont Mine twice, so this time when we headed down that way, we decided to go through the Belmonts to the west of the mine. From Wickenburg, take Vulture Mine Road south and keep on it after it crosses the Aguila Road and turns to gravel. Be aware that this trip will require at least a high-clearance vehicle, even if you just want to see the mine and go straight through to the CAP and I-10.

Also, be aware that there are mine shafts scattered everywhere in this area, so keep dogs leashed and keep a very close eye on kids. There are also many areas with thick cholla, so best not to let your dog out of the car in those areas.

If you want to take some of the side roads like we did, or if you want to drive up Belmont Mountain to see the adit and the mine entrance, a 4x4 would be wiser. On this trip we took Vulture Mine Road to road 9119 and headed west. Just before you cross Coyote Wash, there is a smaller road that goes off to the northwest and it will take you to Coyote Well, then you can follow it as it loops back to 9119, but we didn’t do that so I have no idea if Coyote Well has water or not.

We stayed on 9119, passing a lot of smaller roads that we’d like to come back and explore someday – most of them go to mines, according to my Topo Maps App. The first place we stopped was Tiger Well. This is an old windmill, a corral, and some water for cattle. It made a great place to stop, stretch our legs, fill the coffee cups, and let Mochi run around. There were no cattle there at the time or we’d have kept going!

Up until about a mile past Tiger Well the road is fairly flat, but then it starts to go through the mountains. There are a few rough spots, mostly at wash crossings. We were looking for a couple of guzzlers that are on this road – on the Topo Maps App they are shown with a spring symbol and the word “guzzler”.

These are water sources for Wildlife, and they gather rainwater and store it underground. The water is fed to a small trough with a ramp down one side so that all sizes of Wildlife can get to it. A fence around it keeps cattle out but allows deer and other Wildlife to get to the water. They are installed by the Game And Fish with the help of sportsmen.

The first one we came to was Bighorn Mtn #3, and it was on a little spur that went off 9119 to the south. It was only a few yards down the road. The weird thing about this guzzler is that we never did find a catchment area to collect rainwater, even when we went online at home and searched with Google Earth. I have no idea how water gets to it unless they truck it in. In fact, the rest of 9119 south of #3 was a lot easier going, so maybe they do truck it in.

The road goes in and out of washes, and sometimes runs down the wash for a ways. We came to an old rock pile with a rusted tin – a real old-fashioned mine claim. Nowadays they are PVC pipe, but back in the day they’d write down their info, put it in a tobacco can, and build a little cairn over it. So that was kind of fun, but the lid was missing from the can so it doesn’t look like that guy ever came back!

Next Guzzler Was Dry

When the road comes to a T, we took the east fork (it’s where the cairn and the can are) and headed to the next guzzler. This stretch of the road is flat and full of cholla, so not a whole lot of fun. The mountains make the road a lot rougher, but there’s also a whole lot more to see. Anyway, the first thing we came to was a big silver tank off the side of the road. I hopped out to check it out, and John stayed in the Jeep with Mochi because of the cholla. The tank had a big round opening and was dry. Downhill from it was a concrete trough just like other guzzlers, but it was dry too. I was starting to feel bad for the animals that had come to depend on it.

I didn’t feel bad for long – within a hundred yards we found the new Bighorn Mtn #4 guzzler. It had the trough, the fence, and the water – but again, no catchment area. It’s a mystery. We were still going through cholla and flatland, so when an opportunity to head back to the mountains came, we took it – it was road 9117A and it heads north through a pass. For quite a while it goes down a wash, then through a bunch more cholla. There is one area that has a lot of cholla but also a lot of saguaros and a gorgeous backdrop of mountains. We also saw an almost square hole in red rock near the road. I walked over to it, and it was only about three or four feet deep, but that had to be hard digging! 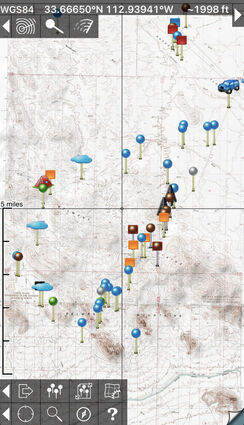 Here's a screenshot of my Topo Maps App showing the main Belmont Mine Road (9114 or Vulture Mine Road) on the left, and 9119 on the left, curving toward the west. The blue cloud-looking pins are water, orange squares are particularly rough spots, blue SUV is a staging area. Blue pins are what I use to mark the road numbers on my maps, since the Topo Maps App doesn't include them.

Shortly after that we came to a road that was running north and south, and so I assumed it was the Vulture Mine Road, so we turned left. However, after a few miles we realized it wasn’t looking familiar at all. We should have turned right from 9117A! Fortunately, it was easy to turn around (not always the case in mountains!), and we found our way to the Vulture Mine Road (9114) and headed north. This takes you through the mountains again past Belmont Mine.

Head Up Before It Gets Hot

Like I said before, there are lots of things to explore around the mine, but that little trip down 9119, although it was only a few miles, had taken hours. By the time we hit Belmont Mine it was time to just head home. What a great day, though! The desert around there is absolutely beautiful, and we really enjoyed hopping out and walking around in the places without cholla. There are so many little roads around there I don’t think you’d ever run out of places to explore!

If you get a chance, head up to the Belmont Mine area before it gets hot. As always, take lots of water, sturdy shoes, first aid supplies including forceps or pliers for removing cactus, and keep your dog on a leash and your kids reined in because of all the mines and adits. As it gets warmer, you’ll have to start watching for snakes, too, so remember that.