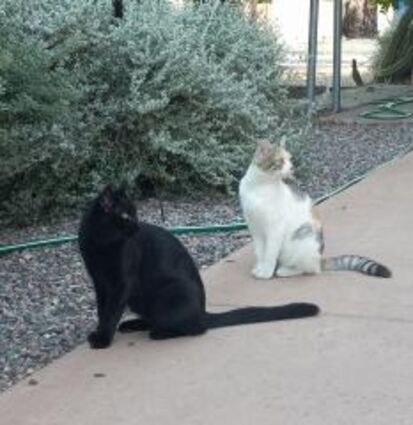 Publishers Note - We would like to thank the VFW 3513 Auxiliary for their perseverance and support of this great project. And, a special thank you to all of the VFW 3513 Post members for their acceptance and support of this rescue project. Even those who did not have a lot of history with felines seem to have, in their own way, supported this effort.

Another thank you goes out to neighbors of Post 3513 who have supported this effort with their help, caring, and in some cases financially. This rescue effort seems to have brought neighbors who were unfamiliar with Veterans Of Foreign Wars an understanding of what these groups are all about.

Six more young kittens have been spayed/neutered in the past several weeks. Our population is stabilizing and we are generating interest among members and neighbors in adopting some of them. Although still considered feral, they are more accepting of people and moving closer to being adoptable. There are still a few in the group who will need to be spayed/neutered.

A new addition is Saint Francis. He is watching over this little family from a prominent place at the post.

We will be adding pictures and comments to this post regularly.

Once again, many thanks to all who are supporting this rescue effort.

In Scottsdale,Ariz., just south of Thomas Road, there resides a community of cats tucked away in the back parking lot and alleyway of the VFW Post 3513. These cats live and lounge on three different three-and four-tiered cat houses brought in by caring members of the community. But when spooked, they disappear into their hiding places.

It was just two years ago when VFW Post Auxiliary members, spearheaded by Senior Vice President Jim Allen, made it their mission to care for the growing cat population. What started as an occasional feeding of the kitties became an all-encompassing labor of love for these feline friends.

At first, a donation jar was put out at the bar, and in no time the Auxiliary and Post had collected enough money so that the mission soon expanded into a catch-and-release program by which cats were trapped and taken to the local vet. There they were spayed or neutered, given shots, had their ears tagged, and released back into their home in the VFW Parking Lot.

This endeavor became affectionately known as the "Alley Cat Project". Before long, it had grown from a Post-membership ministry into a whole neighborhood ministry in which neighbors reached out to also protect, feed, or shelter the cats. In fact, the neighbors and Post members have become such good friends that phone numbers have been exchanged and the Alley Cat Project has also become a sort of Neighborhood Block watch. 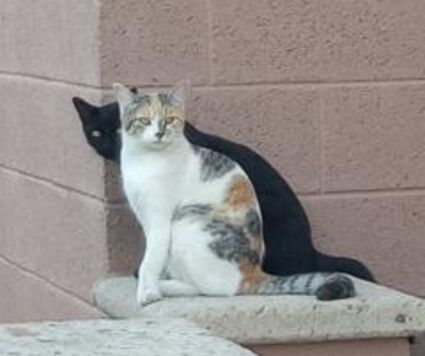 Several of the kitties have had the good fortune of being adopted by VFW members and patrons. Many still need homes. One charming fellow, Frankie, has become the unofficial mascot at the post. He's a beautiful black cat that boldly walks up to members as they approach the door. He's as good as a service dog with the kind of joy he brings to the veterans and our guests.

Members of other service organizations are welcome. If you are not a member of any of the veterans' organizations but would like to visit us, just stick you head in the door and someone will sponsor you for a visit.

We have great food and fun activities.