Owls: They Burrow Straight To Our Hearts 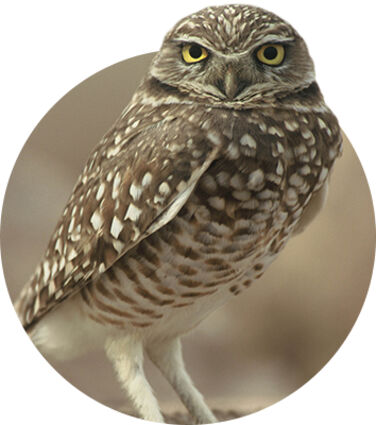 The western burrowing owl is one of the most interesting birds of prey in Arizona. Its species name, cunicularia, means "miner", in reference to this owl's unusual habit of spending time underground. Their use of burrows makes them susceptible to impacts from ground-disturbing activities. Burrowing owls are increasingly at risk of displacement in the greater Phoenix area due to commercial and residential development. As one of several solutions to help conserve and protect the species, the Arizona Game and Fish Department is relocating these owls to key areas, such as Powers Butte Wildlife Area.

Powers Butte Wildlife Area was selected to be a new relocation site as its food plots for other wildlife species provides excellent habitat for burrowing owls, in addition to the exemption of any development in the future.

In November 2020, volunteers from Audubon Southwest and Wild at Heart assisted Department staff in excavating 4-foot deep trenches, and installed 48 artificial burrows with nest boxes, as burrowing owls nest underground. Twelve owls (two males and 10 females), all displaced from developed sites across central Arizona, were released into "release tents" in January 2021. This "soft release" allowed the birds to get acclimated to the burrows, their surroundings, and each other.

Dedicated volunteers fed the owls every day for 30 days in the tents, and for a week after the tents were removed. The site will continue to be monitored twice a month through the breeding season (July). Another release is planned for the winter of 2022 to augment the population and to get displaced owls onto the landscape as soon as possible.